Thought I'd share a little gallery of photos I'd previously taken and posted on Instagram. I usually just post art on Instagram, but sometimes you just come across something interesting and want to capture or document it.

Did you know I tattoo?

Tui the Cat
Leave a Reply

I made my own T-shirt

Most designs you find at local retailers are boring, ordinary, common or look cheap and tacky- especially this recent craze for rectangle prints on the fronts of t-shirts which look like an uninspiring ink-jet transfer paper job. A design on shirts, any other clothing, or even tattoos on skin need to be placed properly. A top-heavy shirt with a design covering just the shoulders and chest or an a-symmetric piece of artwork can look great, but most companies just churn out the same, basic, small to medium sized square or round design slapped in the centre with no consideration to flow, composition or just trying to do something a bit different.

Recently I designed a full-print shirt with one of my doodle-mech designs after stumbling upon a UK company who can process full-coverage 'dye sublimation' shirts at small quantities. Check out www.sublab.co.uk for more info. I designed the shirt to fit the provided template, then sent it back as a PSD Photoshop file. Wanted a dark purple tee with contrasting orange for a while, so here's my opportunity to get one 🙂

There was no mention of shirt dimensions other than chest size on site at the time, so did a little research for "American apparel t-shirt" to get a fairly good idea of the size I'd need. Being 6'1" male, with a 40" chest and 35" waist, I went for a medium and it fit pretty well. Some sizes hinted at a large being more appropriate for me. Although I prefer a slightly tighter fit, so wonder if a 'small' (described as a 34-36" chest size) would have looked better on my frame? I wondered if it would be possible to find and supply your own shirts for printing to guarantee a better fit? If spending over £30 for a t-shirt, you'd hope for it to fit well as well as look good.

The design came out very nicely with colours nearly as vibrant as my RGB computer screen. Tonal contrast was lacking a touch in certain areas, which is worth taking into consideration when designing my next shirt. There wasn't enough contrast with the subtle greys on the inside neck logo, so would also look to make that darker for next time. Very fine lines don't show up so well- keeping things a little bigger and bolder is the way to go.

The biggest problem was the inevitable white creases around the seams and armpit areas. Patches, nooks and crannies where the print doesn't reach. I knew there would be a strong possibility of this happening and they looked pretty bad if the arms were raised. I manually filled these areas with a black Sharpie, which over time fades out to a grey tone. Took some effort but now looks A LOT better than it did upon arrival, and probably not noticeable unless pointed out. I'm hoping it'll hold up in the wash. I may need to try other permanent ink or fabric markers if not.

I like the idea of selling full front and back print shirt designs, but with my mark-up on top, I'm not sure people would be willing to pay £40-£50 for a single t-shirt? It may not be everyone's cup of tea, so for now I'll continue to create my own custom shirts from time to time for personal use and leave it at that. Many thanks to Sublab for providing the opportunity to try this. The shirt looks awesome! 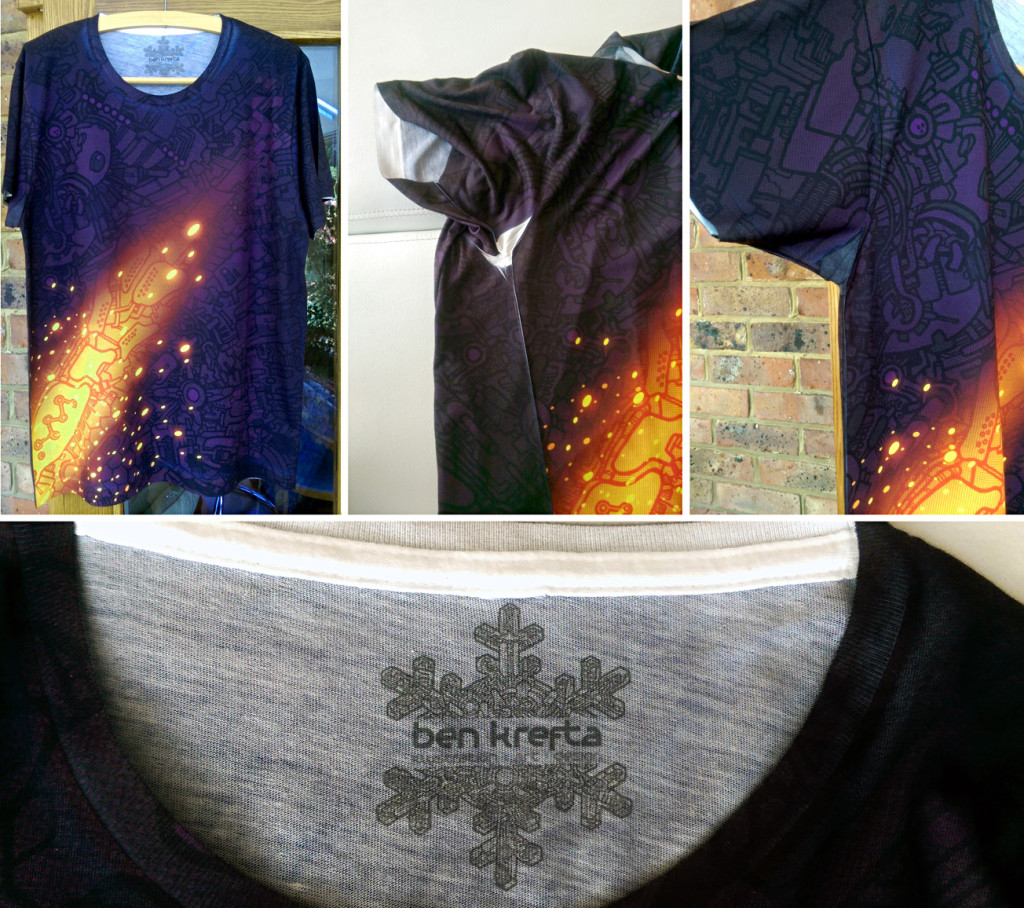 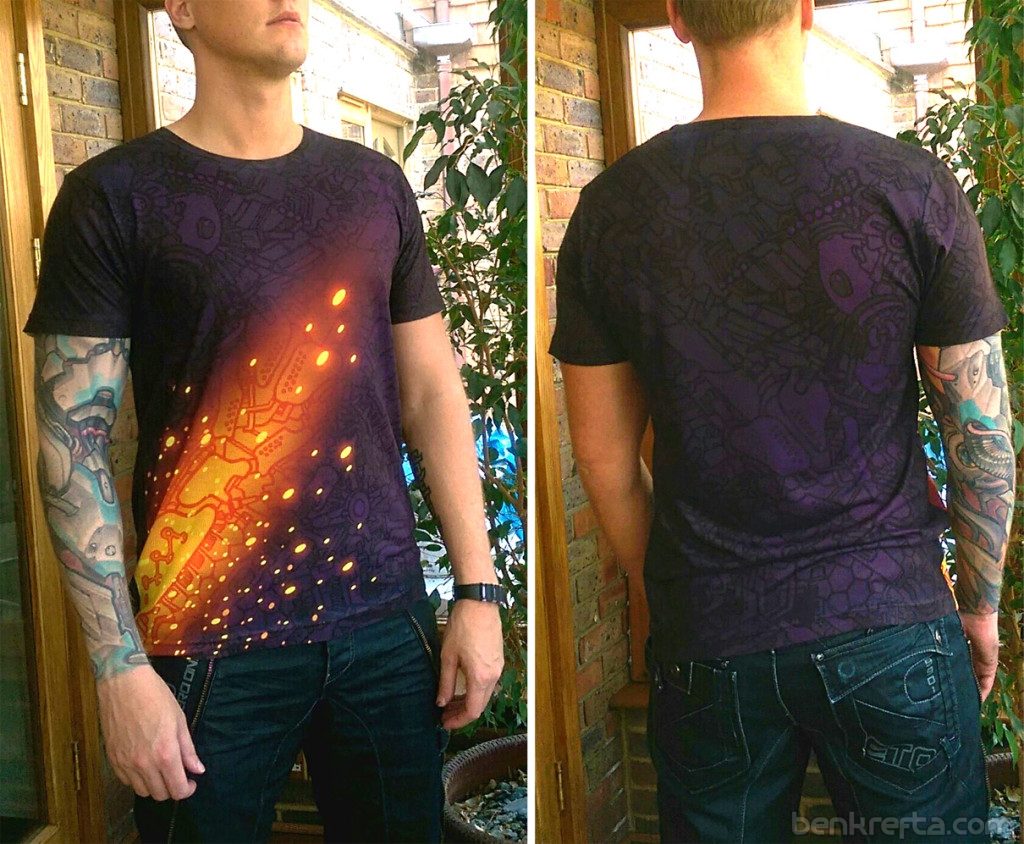 Apologies for the poor photo quality of on my phone, but you get the idea 🙂

My old site Organic Metal- moved it to a new server today and half of it needed updating as the code was so out of date...

It is nearly 15 years young now, with the latest web design being around 10 years old. I still like it, but the internet has changed- people want relevant content and quicker. Most people aren't looking to read through 100s of pages of content on a single person. Especially now that nearly everyone who draws, paints and designs has some kinda web presence, be it on their own personalized sites, or through social media platforms.

I've created a new web portfolio - https://www.benkrefta.com [You're looking at it] - something a little cleaner and simpler to replace my previous Organic Metal website. Let me know what you think

It's built on WordPress making it easier for me to update, as well as easier for visitors to navigate and interact with. It is also responsive- meaning the layout becomes simplified to fit tablets and mobile phones.

I totted it up - putting the site together took me about 130 hours! (So Far)

I joined up to Freelancer.com a number of years ago- my first experience with crowd sourcing- which is basically a case of assigning work you need done to a crowd of potential bidders on the internet.

It sounded like a great idea- there's lots of work to go around from potential employers and providing you can put forward a good case for each project, there didn't seem much reason not to be provided a regular stream of work.

However, there's a few issues I wanted to highlight after having used the site several times.

1. Getting work is difficult!

When bidding on a project you start at the bottom of the rankings list. That's until you complete more jobs, earn more money and receive positive reviews through the site itself. You may have had decades of experience off-site, but that fact is irrelevant to how you're ranked on the freelancer.com bidding list. Competing against the regular freelancers on the site will therefore be challenging- they will have already completed work specifically through the site and boosted their rank, despite not necessarily being the most talented, hard working, professional or suitable candidate on the list. To compete you'll need to build your site rank and to do this to start getting better paid jobs and until then, you'll have to under-sell your services to stand out and have a chance of being selected to work on any given project which may already have a several, if not dozens of bidders already.

2. Reviews can be bullshit

I entered a graphic design competition on the site, won it out 20 or so other entries. Great! Especially considering I'm a much stronger illustrator than I am graphic designer. However, being given a 2 star review from it wasn't so great! Why did this happen? I was marked down in my review for things like 'lack of communication' despite the fact there was never an opportunity to communicate - the competition format simply allowed submission of entries and then a winner was chosen. As a person who takes his level of service and professionalism seriously, I'll always aim for nothing less than a 5 star rating and will go the extra mile with my clients to make sure their expectations are always met if not exceeded. It's pretty annoying that my account is now stuck with this unfair, unjustified poor review and it gives a completely wrong impression of my work ethic, lowering my chances of getting hired for future projects.

If my art or design ability wasn't up to an employers standards, I'd be more than happy for them to award a different winner, or in this case I'd rather just give them the work for free than receive a poor review... Yeah, it pissed me off.

Reviews count for a lot on Freelancer since they contribute to your ranking as a professional, but they don't always indicate a freelancer's actual knowledge, ability, experience or professionalism.

3. Can't compete with the rest of the world

I don't live in a developing country. I need to earn enough and charge an adequate fee to an employer to be able to pay the cost of living in the UK. Most freelancers are from countries such as India and Bangladesh where the cost of living is less and so are able to complete a project for 10-50% the cost of out-sourcing to a UK freelancer. If you want to earn a fair amount for your time and pay your bills with the money you earn through Freelancer, forget about it!

I've also used the site as an employer to find assistants to help with parts of a project I couldn't quite finish myself. When it works, it's great- you get exactly what you want for a very reasonable price.  When it doesn't work out however it can become a very stressful experience.

1. The standard of freelancers vary

Communication is an issue- since most are from non-English speaking countries. Be prepared to deal with broken English and a degree of rudeness and unprofessionalism from many freelancers on the site.

I've so far awarded seven projects to bidders, but only two ended up starting and completing the work. The others would either ignore messages or make endless excuses, stating they'll start it tomorrow and tomorrow never comes. This wastes days or weeks dealing with freelancers who have no intention of working.

Right now I am listing a 'micro project' to edit a few lines of code on a web page. I've listed my budget of £10-£20. It's 1-4 hours work max. Yet some freelancers will ask for hundreds of pounds. One guy is currently asking for £2600 for the job! Obviously they can charge whatever they like, but surely a lot of freelancers don't even read the briefs of the jobs they bid on.

So I'm currently listing my last micro project on Freelancer and hopefully once it's finish, I'll never have to waste my time with the site again. 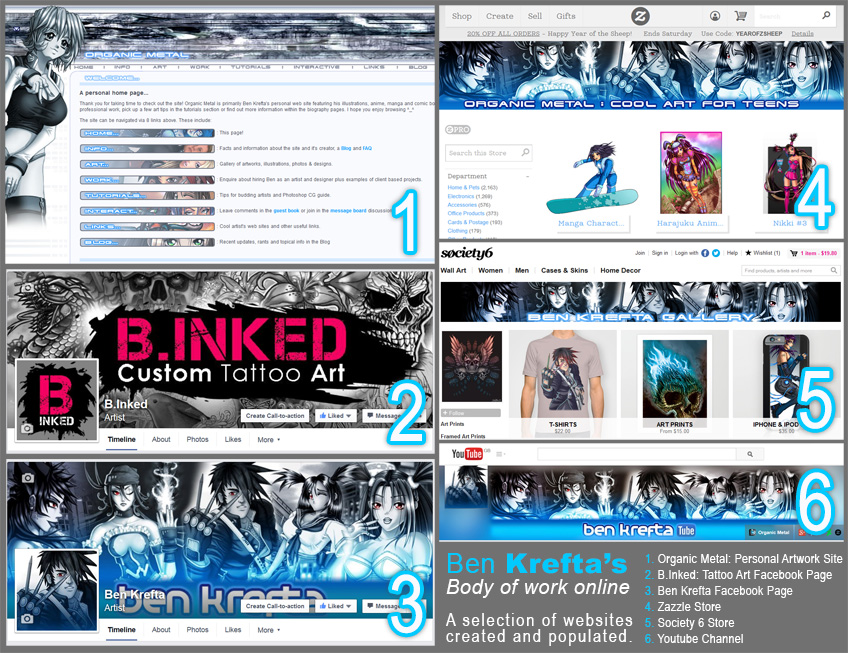 Selection of screen shots featuring some of my web things...

'About me' https://about.me/benkrefta also covers most of my web presence. 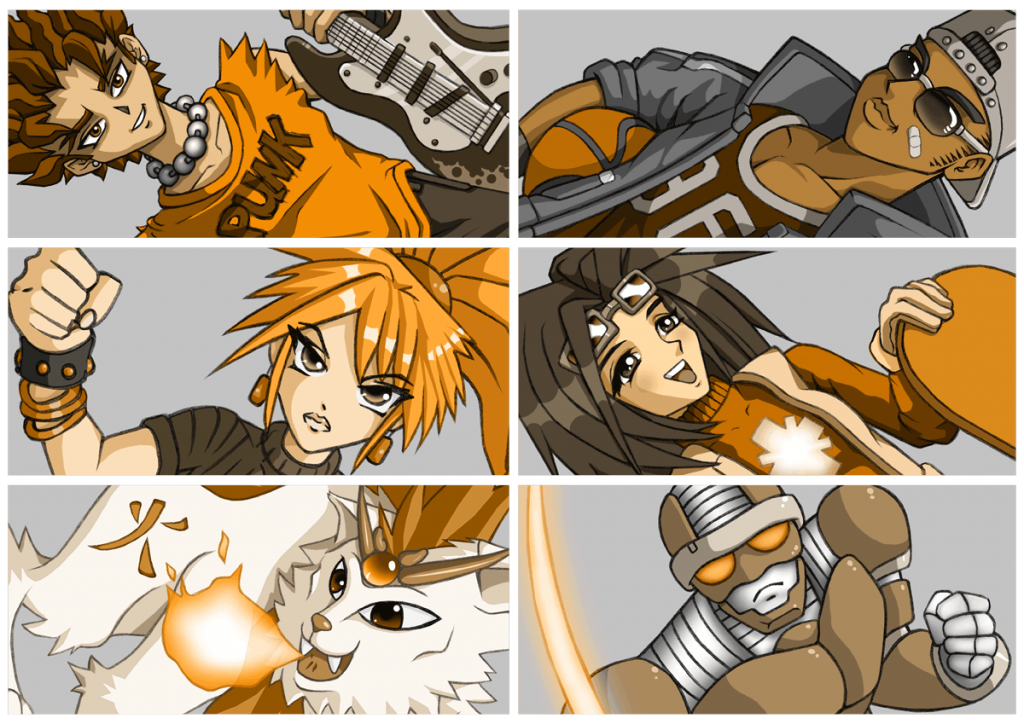 Little compilation of characters from my book tutorial 'Drawing Manga - Step by Step'
It's a relatively short how to draw guide book I worked on years ago and had been re-released more recently. I get nostalgic looking back at previous projects I'd worked on. 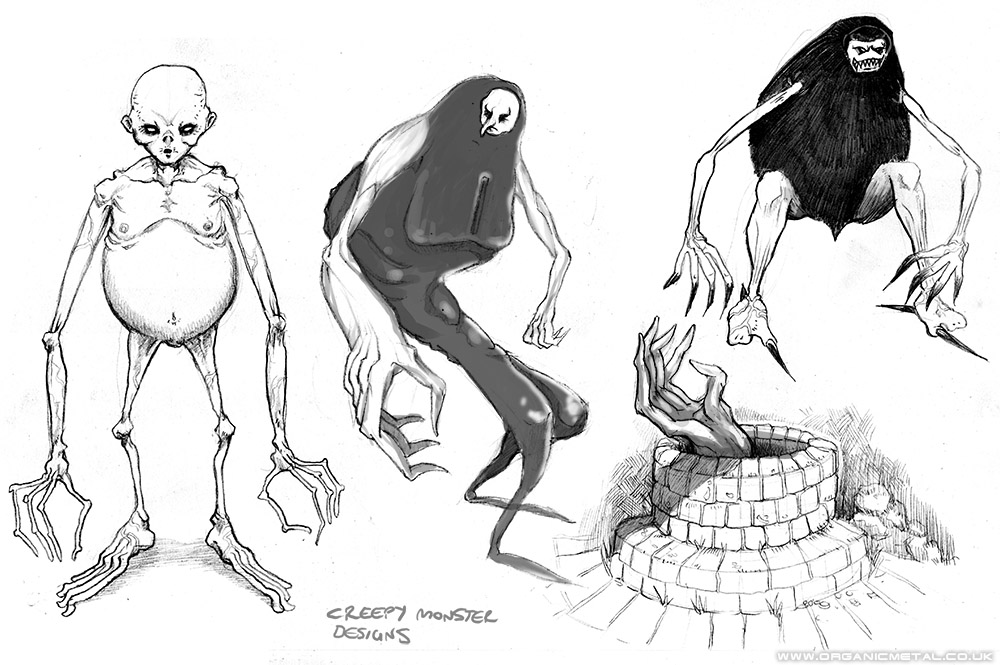 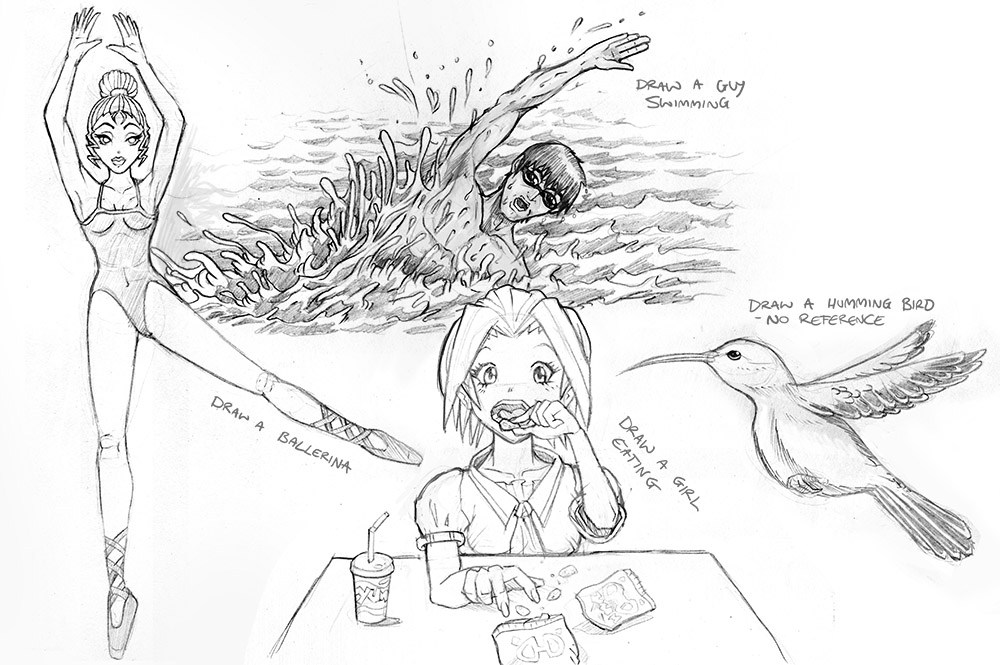 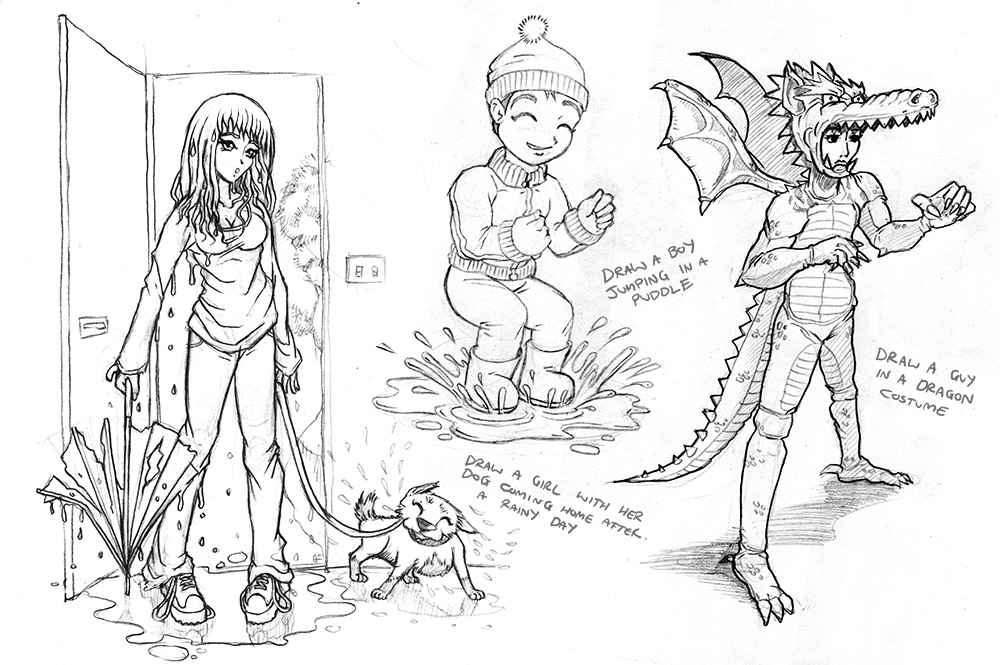 Commission for the twins birthday. 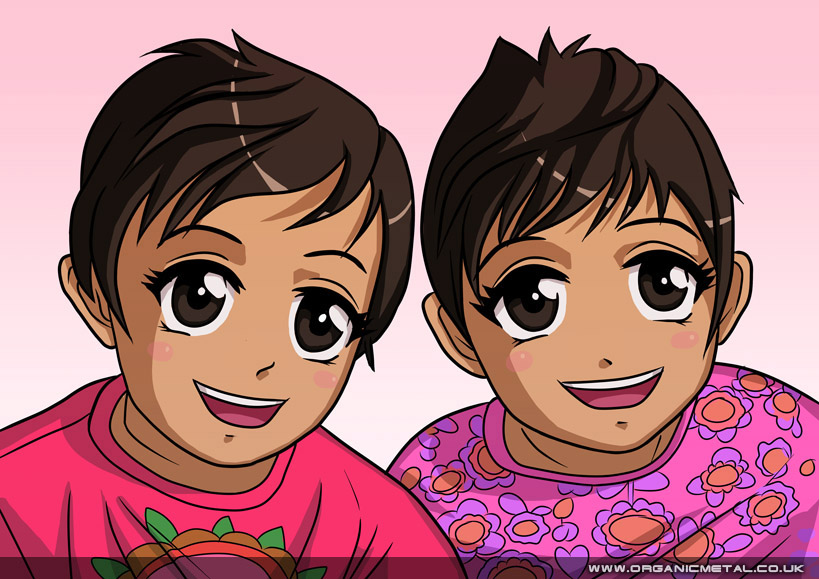 This anime style portrait illustration was done with the intention of being printed on a birthday cake. I wonder how it looked in the end? Or how it tasted? 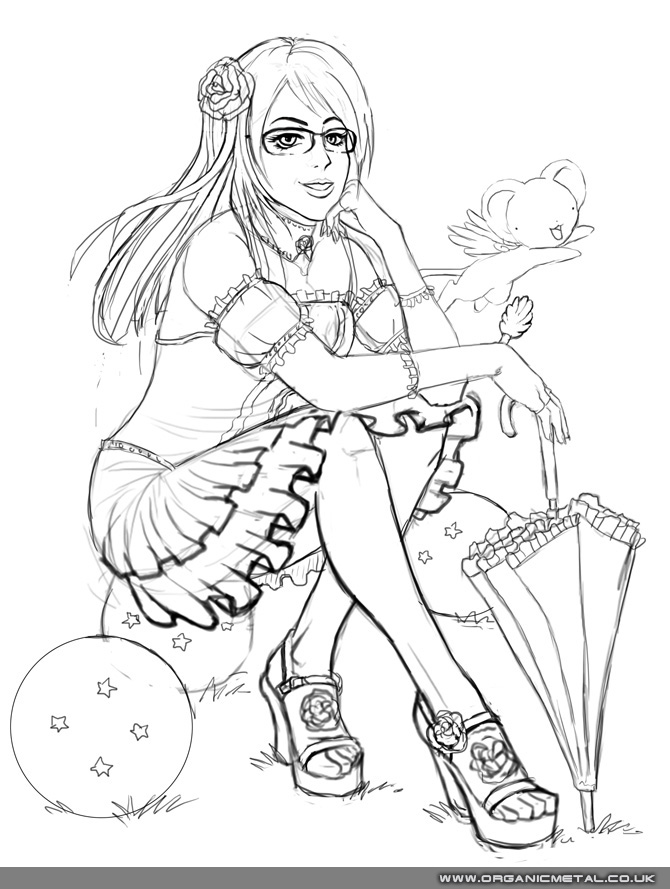 Tegan's a fan of Japan, Dragon Ball Z and Card Captor Sakura, so it was cool to get a few references in there with her portrait. 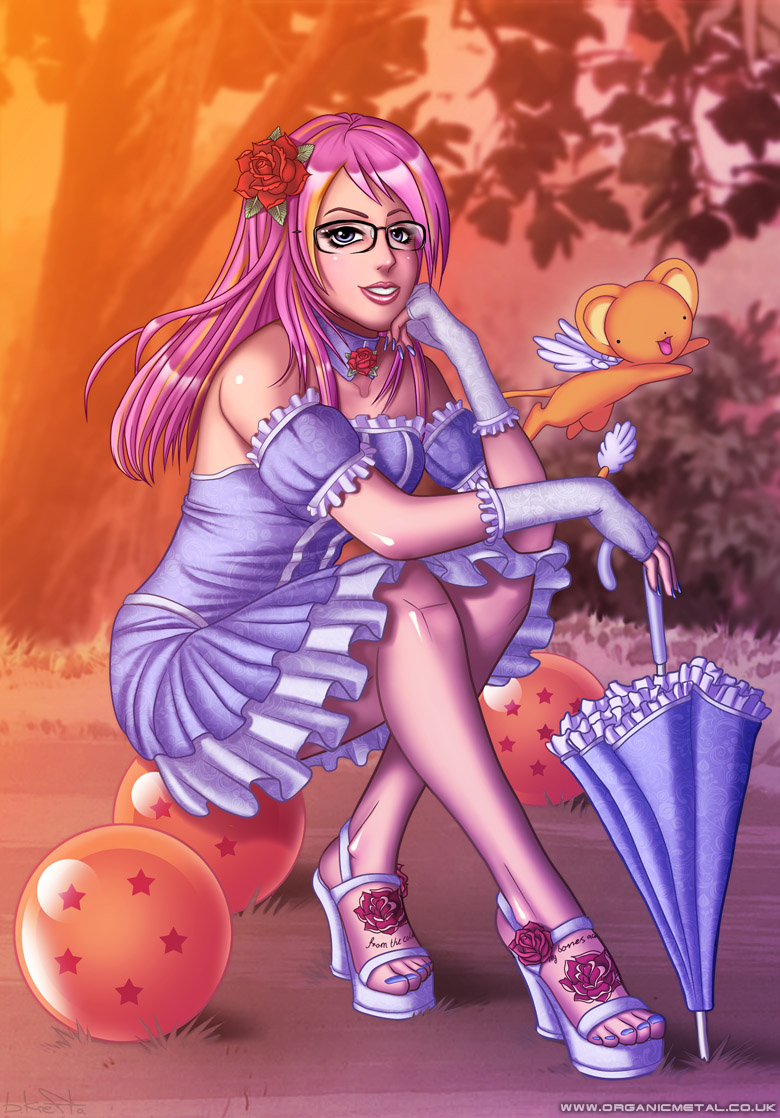 I think this must be one of the few times I draw a seated pose, and I like the colours with this one. Looking back, my only regret is that the shoes should be closed-toe, but like with every picture, you do what you think is right at the time ^_^'