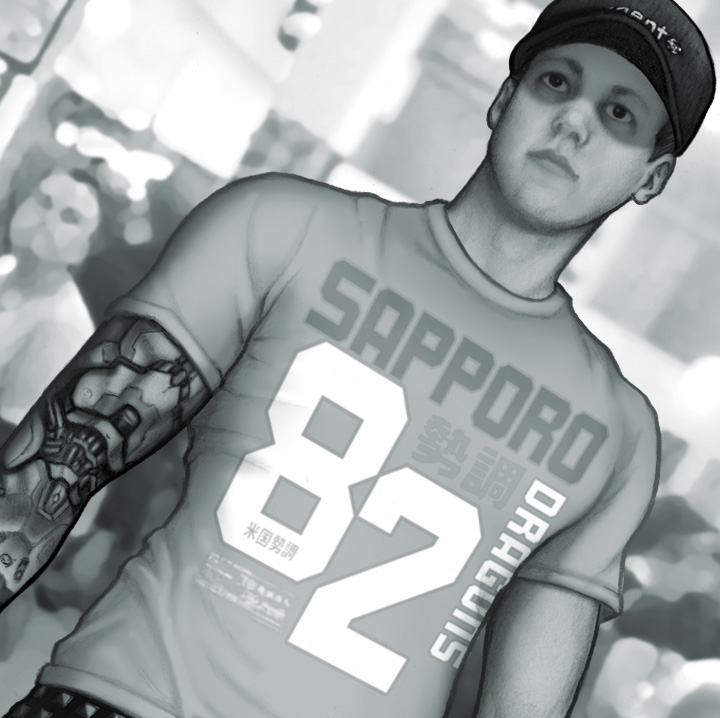 Born in Kent , England in 1982. I'd describe myself as a freelance illustrator and designer typically creating manga inspired character designs, although throughout the years I've crossed over into graphic design, photography and most recently, tattoo art.

I've been drawing on and off for most of my life and been a fan of cartoons and comic art since I was little. Like most youngsters, at that time I wasn't really aware of specific artists or the commercial field of comics and animation. I just loved looking at the cool pictures in my older brother's Marvel comic books, in computer game magazines and on video game box covers. I tried to copy these pictures best I could for my own pleasure or my friends and I would make up our own robot designs or weird monster characters, no-doubt influences from the videos we saw and computer games we played at the time.

My family and I moved house to a new area when I was around 10 or 11. I made new friends, but none that enjoyed drawing as a hobby and regret not being able to fully share my passion for art or other cool and geeky stuff I used to like! However, I still kept drawing in my free time and at school. It was something I was reasonably good at and the ability to draw gained me a degree of respect among my peers.

In Secondary School (from when I was 11-18), I was still drawing the monsters and other demonic things!

I suppose kids these days would have considered me a 'Goth', perhaps an 'Emo', or maybe just a geek for doodling decaying skulls and robots covered in spikes over my sketch books! Most of the boys in my class just seemed to think it was cool.
It was pretty awesome to be able to impress people with some art skills, but kinda frustrating that I never managed to find a buddy or mentor who could help inspire me or acceletate my potential. Staying motivated to draw or practice was always an issue. My brother was pretty good at art, so we occasionally drew stuff at home. He gradually seemed to grow out of drawing and I ended up overtaking him ability-wise.

During my years in secondary school my drawing ability slowly improved. I wouldn't say I had a style of drawing. My teachers would always know "it was one of Bens" - but I think that was a case of content more than anything else. Style was never an issue and I didn't even consider it, until my later years at school when I started buying more American comics and Japanese anime. It was the art that drew me into comics, and not the stories like it should have been! I began regularly spending my pocket money on many of the new titles under the 'Image' publishing label such as 'Spawn' and 'Youngblood'. Image was a fairly new company, unlike the big boys DC and Marvel and at the time I felt they were producing the best comics art-wise and were particularly setting high benchmarks in the computer colouring department.

Later, my brother and I discovered 'Anime'. I can still remember the excitement of finding out about modern Japanese animation. Unlike the majority of cartoons I was used to on UK TV, they contained a high level of detail, a clean, slick art style, more mature content (and this is before anime became popular on kid's TV with shows like Pokemon and Dragon Ball) and were generally based around sci-fi and fantasy themes which I've always found appealing since I was young

Comics and manga then began to strongly influence my drawings - both its style and content. It was similar to what I have always done, but more focused. 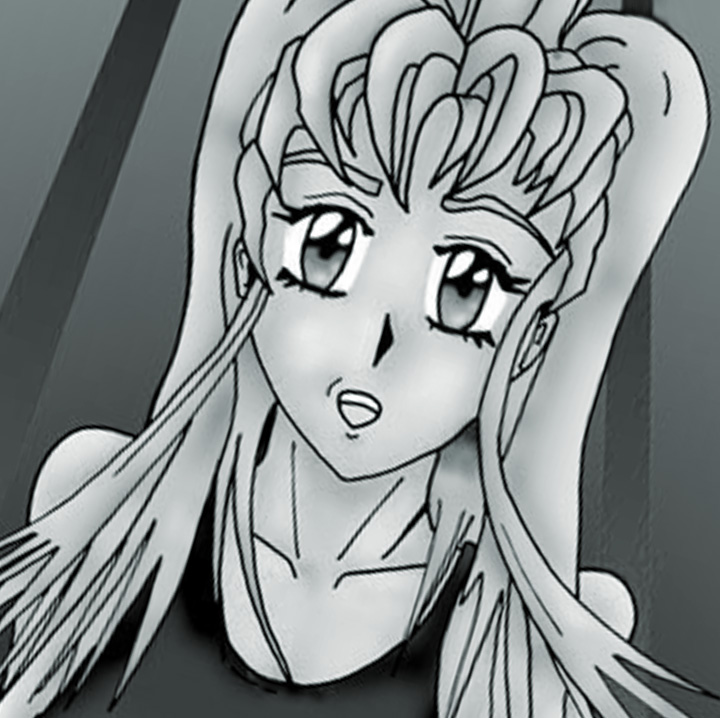 After that, I was introduced to the internet in the late 90s / early 00s. This led me on the path to discovering computer generated (CG) art and colouring. I found amateur artists on the web, who were producing anime style art which was coloured like a professional anime cel or comic page. A sharp contrast between that and my coloured pencil and felt-tip pen efforts! I researched how these amateurs were all achieving professional results with their colouring. I found out from "Julie Dillon's Anime and RPG site" (now offline) it was down to computer software called 'PhotoShop 4'. The bad thing was the fact I also learned how expensive Photoshop (PS) can be to buy! I wanted to own PS so bad, so that I could use it to make my pictures like the pros! I had to make do with 'Corel PhotoPaint 3' - a far inferior program, but at this stage I was mildly happy just to be able to achieve basic flood-fills and gradient coloured pictures. Before long I realized gradient fills weren't enough - professional and amateurs alike were putting serious effort into digitally rendering their work by adding more tone, using realistic shadows and light sources etc. 'CGing' had moved up another level.  PS seemed like the answer.

In the end I did manage to get my hands on PhotoShop!

Then it hit me... Still, all I can do is gradient colour fills! I'd compare against other's works in comics, art books and on the web and although their styles of rendering differed, they were often at a far higher level of finish than I was managing to achieve. I realized a computer package, no matter how much it cost could never render a picture for you and that it was up to me to use PS as a tool (like a basic paint brush and paints) rather than a magic wand.
I naively hoped computer software would do the work for me and I wouldn't need to learn about colour, shadows and tone to produce slick looking CG art!

I did know a few basic lighting techniques from using traditional media, so built upon these and persevered to learn how to make best use of Photoshop as a tool. It took me a few years to achieve a decent looking CG result. My skill as a digital artist has increased dramatically since I first started to get to grips with computer software, so colouring and rendering my artwork was getting much easier than at first.

It took a while, but I'm now at the level where I can compete against some of my early idols within the world of commercial art and illustration and I'm confident in saying I can produce work to a professional level. Although I'll always be the first person to point out my limits. There are countless artists I aspire to being even half as talented as and I can see the general standard of art and design always increasing year after year.

It was during early the 2000s when I started getting paid for my art. A lot of the work requests I got were due to people finding my website back when the internet was reasonably unpopulated with sites of amateur artists. Over the years I got to do some cool private character design commissions as well as larger, corporate projects.

Out of all the creative endeavours I've taken on over the years, just like when I was a kid, I still enjoy producing character designs above anything else. And I love thinking about styles, fashions and anything with a touch of sci-fi. My illustrations are full digital or hand drawn pencil drawings, which are scanned and coloured using the computer, as explained in the workflow section. Although I will occasionally mix things up; rendering with pencil alone, inking with fine-line pens or using brush markers.

Speaking of mixing things up, I never stuck solely with illustration. The internet fascinated me and I branched into web design- a role I've taken on within employment and on a freelance basis. In fact, I've probably spent as much of my career designing sites and graphics as I have drawing! In late 2005 I considered increasing my graphic design knowledge and went to uni for three years achieving a 1st class BA degree in Graphic Media.

An issue with my eyes left me unable to work at a computer all day, every day, so have had to cut down on the digital art and design. My latest ambition is becoming a top-notch tattoo artist. It's one of the few jobs which will allow me to design the kinda art I want and will hope that others will want it too because I'll be relying on them to wear it for the rest of their lives!

As far as art and design goes, that's me in a nut shell!

When I was at school people used to see me (artistically) as a 'big fish in a small pond'. Although now I see myself more as a 'small fish in a big pond'! Having been blown away far too many times by the amazing work of the seemingly limitless supply of talent pouring out of the internet alone has put me in my place. I feel humbled because it. There will always be people better than me but I take pride in what I can do and am thankful for not just being a 'small fish in a huge ocean' like the majority of artists or wanna-be artists on the web. I will just let my work speak for itself