Over recent years I’ve broken away from video gaming and have found myself more regularly playing table top games (TTG). I was always a fan of Scrabble, Boggle and Pictionary and would play lesser-known adventure game ‘Talisman’ for hours a time as a kid. 4 or 5 years back I discovered Catan, Ticket to Ride and Pandemic. These 3 in particular being known as ‘gateway games’ to modern board gaming. From there I stumbled into plethora of modern board games such as those listed on sites like BoardgameGeek and the many game campaigns running on Kickstarter.

The global pandemic and lockdowns of 2020 and 2021 made TTG a more regular past-time. With so much our day-to-day lives becoming digitized I can see why the TTG hobby is increasingly growing in popularity. To engage in activities which aren’t screen based, allow you to connect face-to-face with other human beings and be a part of the real world is never a bad thing.

It would be fun to make my own game!

I felt inspired to try creating my own game. Nothing massively complicated, but also something with enough depth to want to play more than once or twice before shelving it. I’m not a pro game developer and not expecting this to be a global hit, but do hope to invent a cool little game and have some fun in the process. If I sell it after all is said and done, great! If not, I’ll still get a lot out of making it. I can’t lose 🙂

The brief I gave myself:

As with Videogames, TTG come in many different shapes, sizes and forms. ‘Game mechanics‘ – a term more typically associated with digital games has found a home within modern TTG. Examples of these include: area majority, card drafting, deck building, take that, worker placement, story telling, push your luck.

The first step was be to come up with a concept. After a few conversations with my brother about the prospect of creating a game, I decided to go with a shooting battle game. You’d fire missiles / bombs / cannon balls / projectiles represented by cards laid out in front of you. Your opponent would do the same. Whoever displayed the most powerful cards would be awarded the highest damage score and win the game.

Fleshing out the idea

Rather than shoe-horn in specific game mechanics from the start, we discussed how to create a basic scoring system. We came up with.:

Then I thought of ways to increase your score. Rather than just adding more coloured balls, Upgrade cards were introduced. Some would, for example, multiply the coloured ball damage, while others would allow you to defend against incoming damage. There would be less upgrades than balls and there would be a limit to the amount any 1 cannon could be upgraded by. 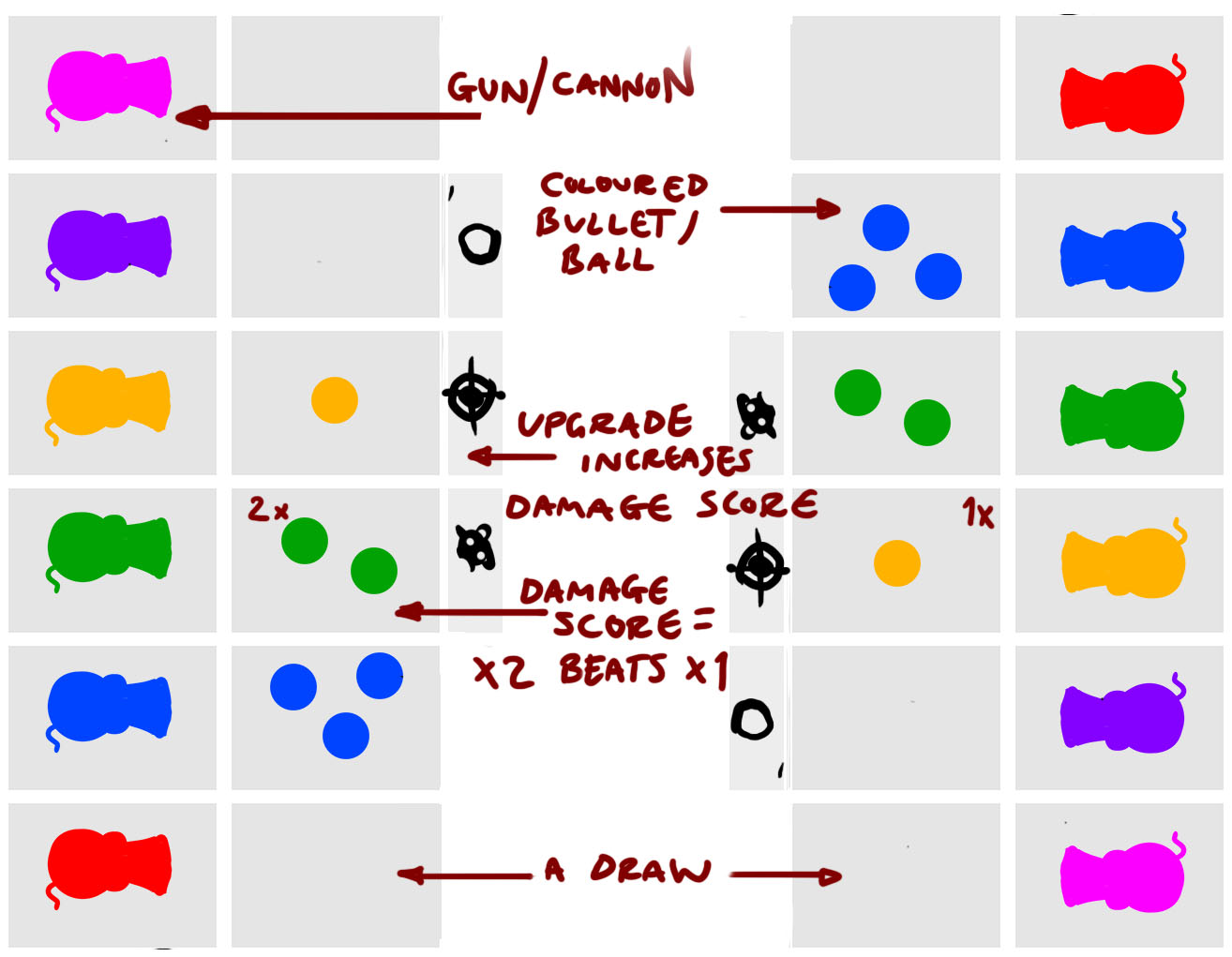 I’d brainstorm several more Upgrade cards as well as Ability cards. These would give options such as randomly removing a card from your opponent’s hand or allowing you to take an extra couple of cards for free from the top of the deck.

It was time to add another condition of victory. In order to win you’d need to fire the cannons by obtaining an Ignition source Card and Gun powder Card. These can be collected during one of the 4 rounds of cards being dealt. In addition thought it wise to create a shop. This would be represented by a range of 3 cards+ Ignition and Gunpowder cards which would always be available to ‘Buy’. You’d use an obtained Coin card or trade in/discarding any 3 cards from your hand to purchase from the shop. This way each player had no excuse to not at least fire off a cannon during the final phase of the game.

The game now includes mechanics including: a Variable Set up, Card Drafting, Deck Construction, Hand Management, a Trade Market, Take that, Card Layering, A tug-of-war style of back and forth, then the final, exciting showdown! For a simple game with only 6 points needed to win, I’m hoping it has enough elements to make it strategic and challenging, but with enough randomness to give anyone a chance for victory.

The game, ‘Total Blast’ was ready to play test! 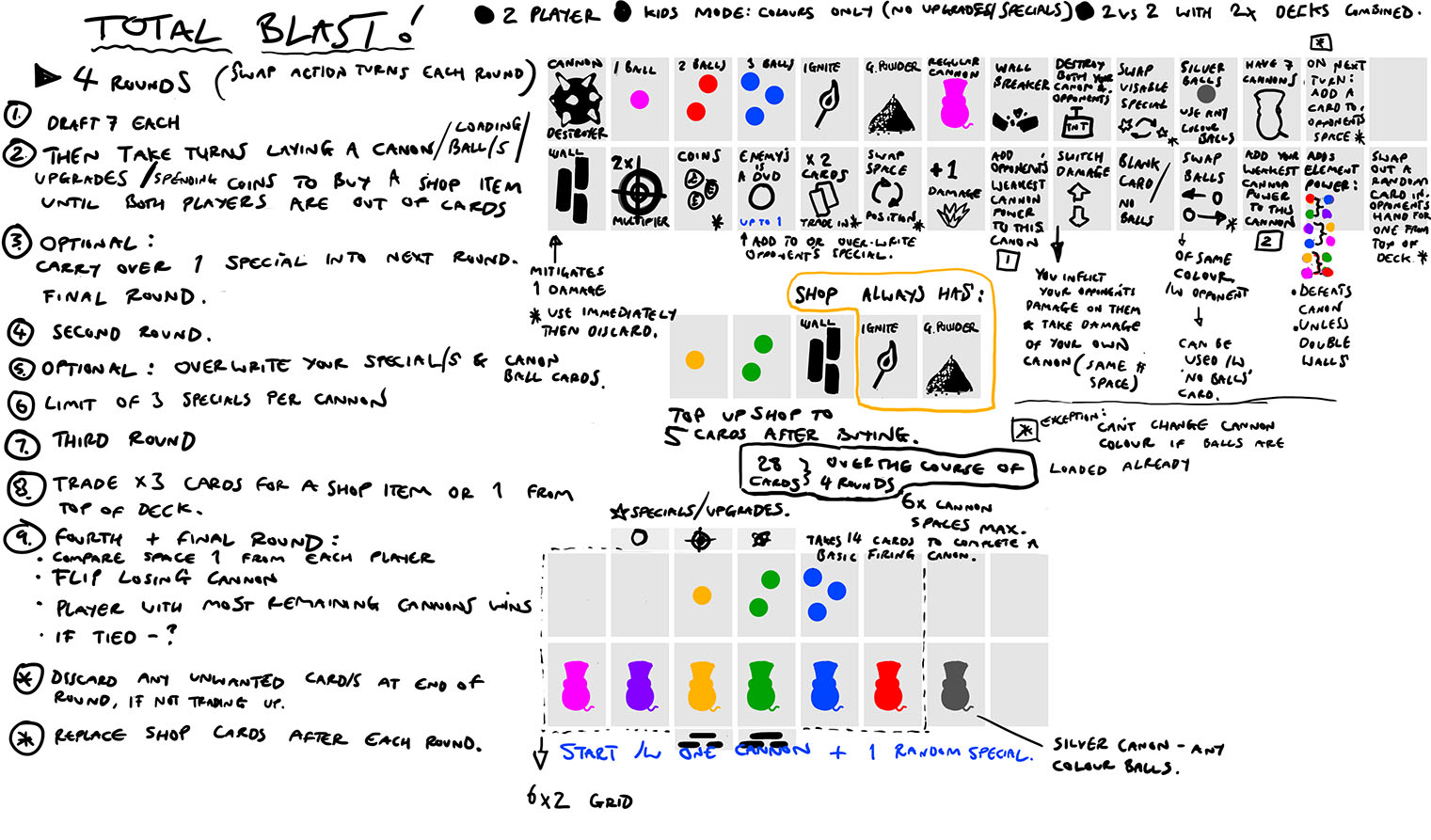 I created a mock-up of the cards in the game just using clip-art and hand written notes. Cards were printed on scrap paper. Not ideal, but did the job.

After 4 play tests with 2 different opponents it worked surprisingly well. Each game took around an hour with extra time spent teaching the rules. Breaks were taken in between to discuss improvements and adjustments. Particularly balancing the cards takes some thought. I want to make sure certain Upgrades are fair and don’t cause ‘glitches’ when used in conjunction with other cards. 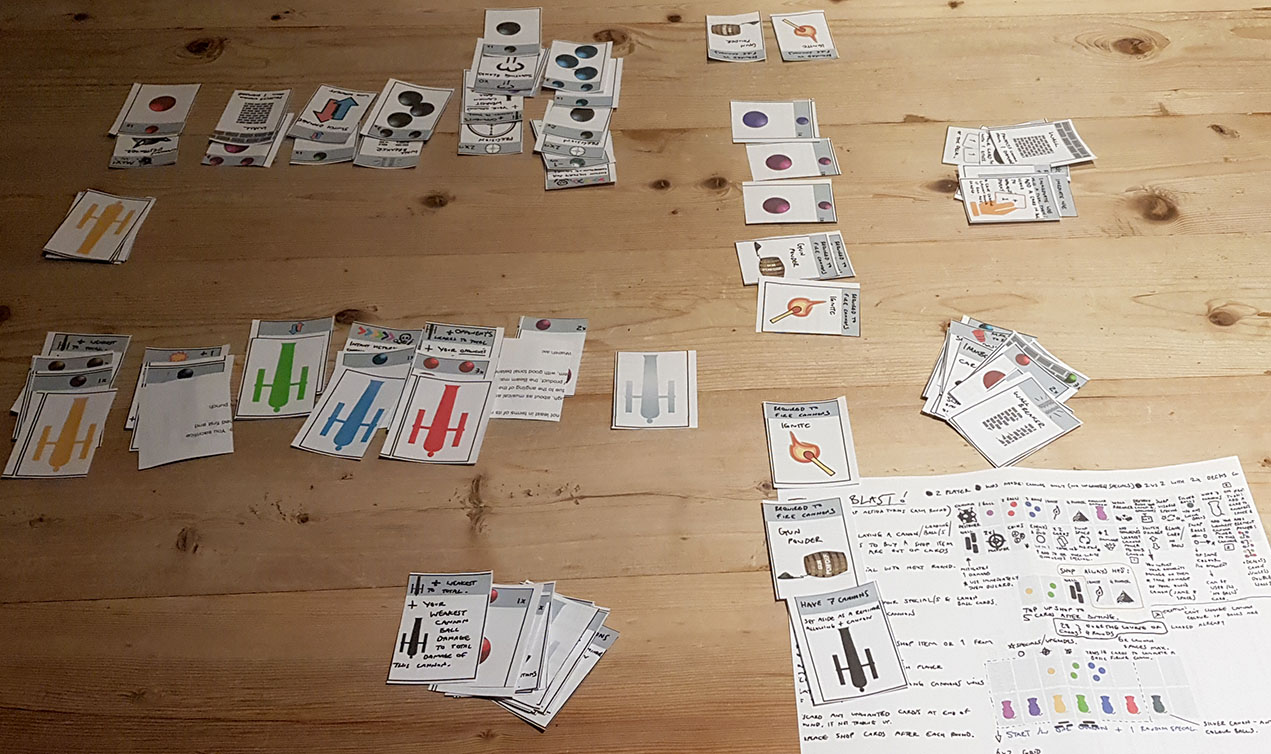 The game is fun! I want to play it again. I’m now trying to check in with my brain to make sure I’m not biased because I created it or because friends and family don’t want to let me down. I’ll continue to play test and ask for honest feedback and go from there. For what it is, I think like I’ve nailed it 😀 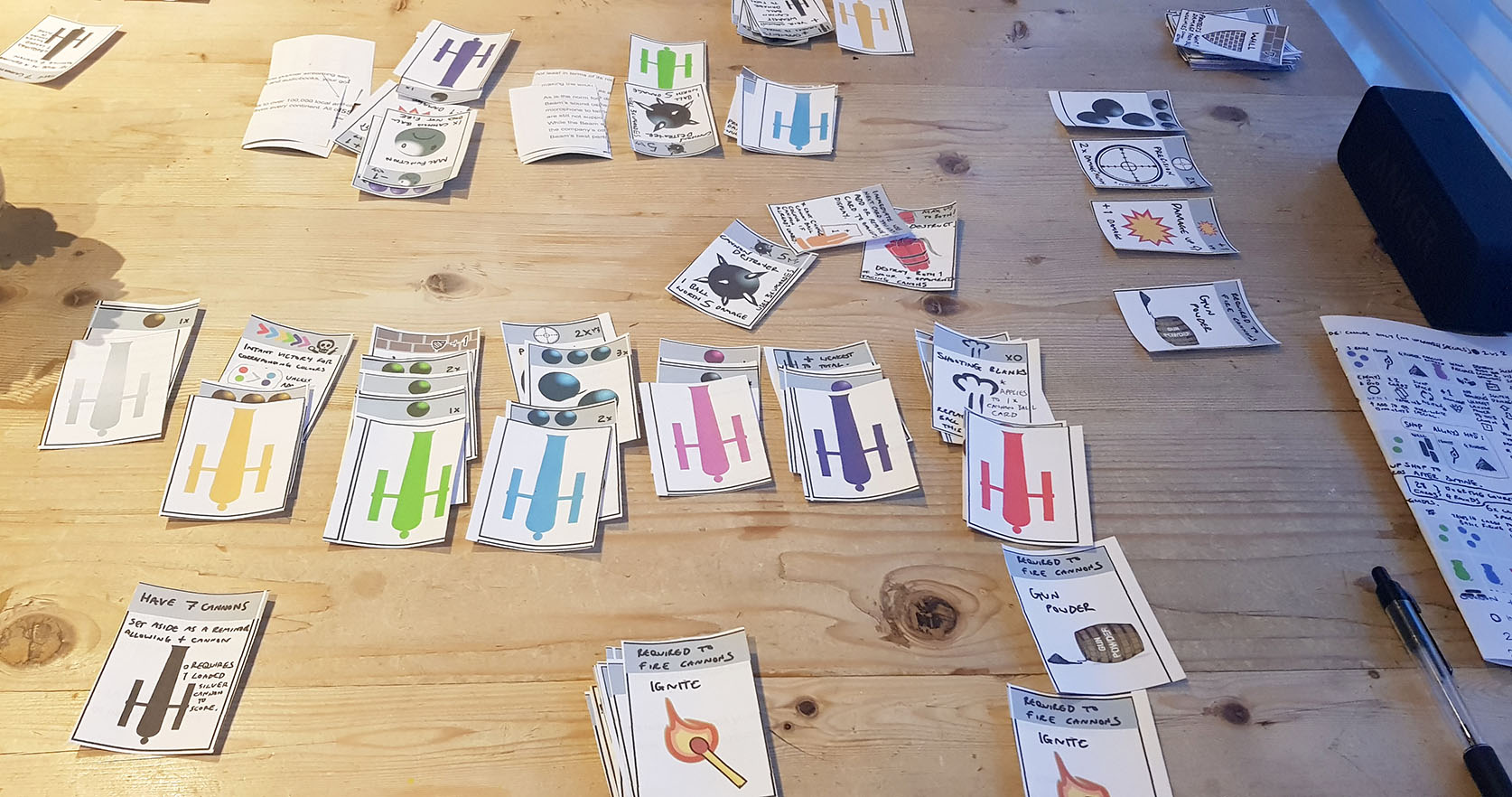 It looks a mess, but makes perfect sense when you play it, trust me 😎

I’ve begun writing out a final rule book. Something which will continue to be tweaked as further play tests continue. The main thought now is- it needs a professional look. With a card game like this the graphics and artwork could make or break it. Illustration and design is my profession so that’ll come in useful! I finally get to commission myself to work on my own project for a change. I’m looking forward to it.

I’ve not decided on art style, or even theme. Perhaps it will be set in ancient China? In space? On pirate ships? In a medieval fantasy world? And then what will the card art look like- Comic style? Manga? Painterly concept art style? I’m pretty adaptable when it comes to illustration, so that gives me options. Maybe too many options?

I’ll start with a few sample cards – 1 for the cannon, 1 ball card, 1 character card and use those as a base to work from for the remaining 98+ cards. Stay tuned.