Care to work on another book?

After the success of The Art of Drawing Manga, I was asked by Arcturus if I wanted to illustrate Step-by-Step Manga- a 60 page book, aimed at a slightly younger market for the publisher 'Scholastic'. Although less pages needed filling up, the deadline was tighter and there was a higher "pics per page" ratio, which meant more drawings were needed. The book was to focus on drawing specific manga style characters, rather than general tips so there was more planning at the start to get the characters right and to decide what was needed for each section. It was good opportunity to work in a different way to my previous title and to gain extra book making experience points. 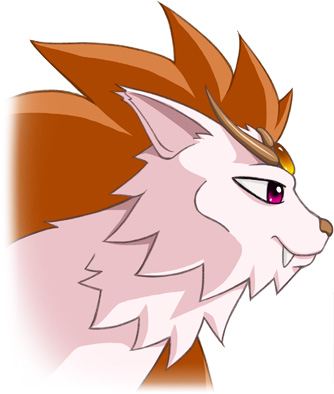 My first task was to design the characters. The American market is quite sensitive to sex and violence despite these themes running through most manga genres- this determined the style and theme of the six characters: JC, Heather, Kimi, D-Boy, Kit-Kit and Striker. Heather, originally a very sexy, feminine design in particular underwent six design changes before she was deemed suitable. Striker was originally a more bulky Shirow-style 'Landmate' mecha, but was considered too scary and violent looking!

Each character needed a normal standing pose, a more typical action pose, head, hand, feet and accessories illustrations- all showing a step-by-step process to drawing them. Two group pictures and other drawings were also requested. I decided to go for a more typical anime look- using flat tone style colouring to appeal to the Yugioh, Dragon Ball and Pokemon fans out there!

After supplying the material, it was the book designer's job to lay it out on the pages and cover: 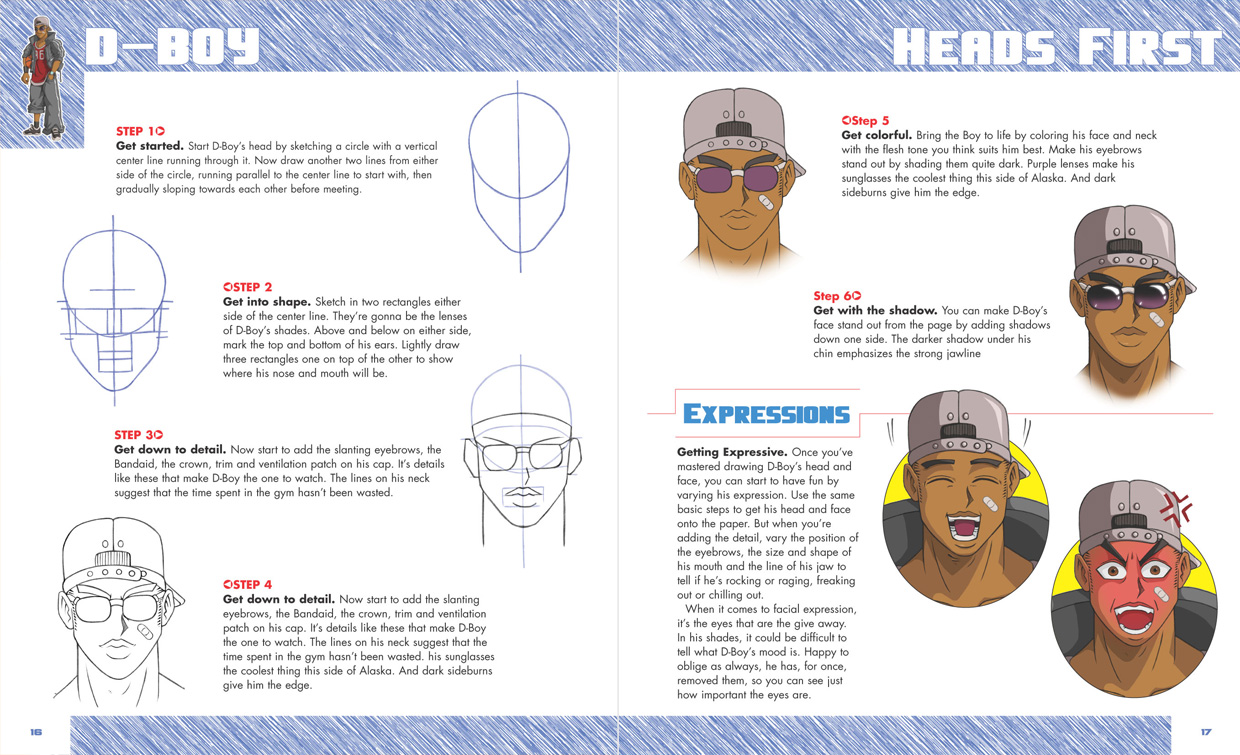 Creating D-Boy's Head: Despite black guys not featuring too much traditional manga, showing a wide range of characters from different countries and environments was needed. 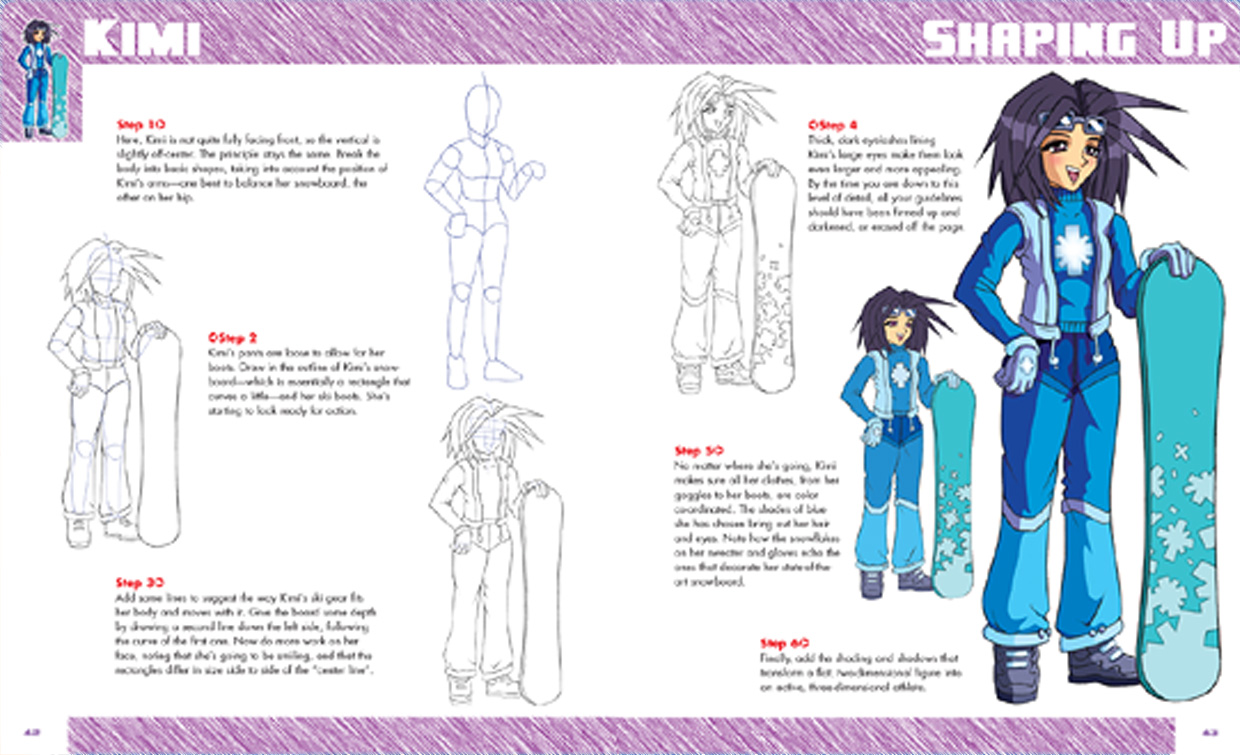 Kimi's Standing pose: There are many ways of drawing a character. I decided to teach the method of using guide lines to get the initial proportions right, which many less experienced artists find to be the hardest part. 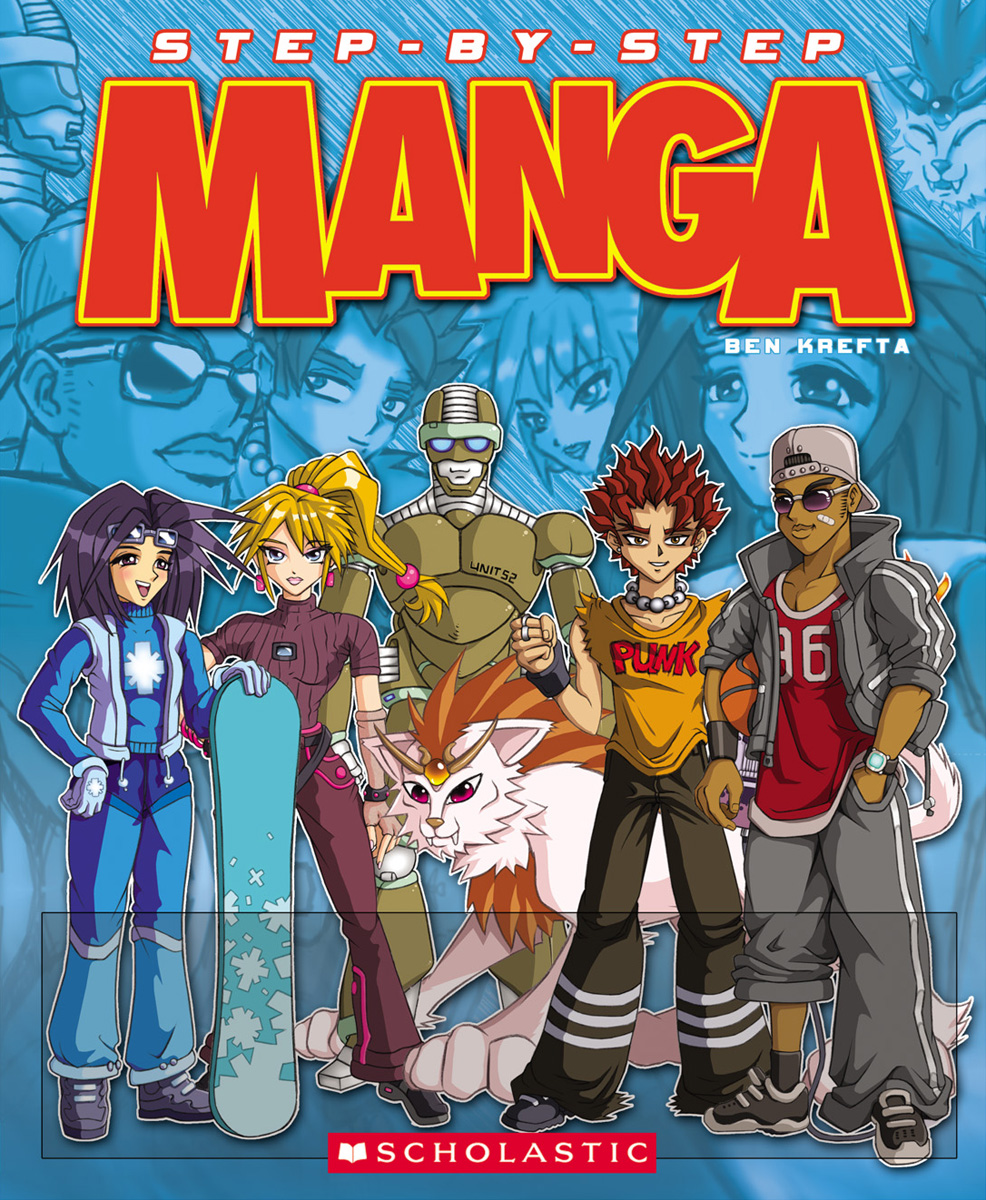 The cover design: The final book looks pretty smart! The extra planning and slick designs has defiantly made an improvement over my previous title. The first edition of the book included a set of colouring pencils on the front cover (over the shaded area). 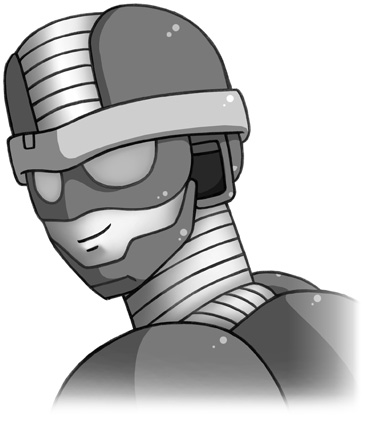 It's great to have completed a second book. I like the featured characters and the overall feel of the book is very consistent, allowing a reader to pick it up and start at whichever character he or she chooses.

So far the title has shifted over half a million copies worldwide! Having one of the kid's book industry's biggest publishers Scholastic buy the book helps raise my profile as an illustrator.

I regret not being able to write the text, other than the character profiles and descriptions. A writer was assigned to 'Americanize' the book, making it more 'kid friendly', while allowing me to get all the artwork done in time! I may work on another book in the future, as I have great ambitions to keep improving.