It was about time I created some new artwork. This time, an anime style school girl; A design I thought might work well as on a T-shirt or Art print with appeal to fans of Japanese anime and video games. I needed an object or symbol floating between her hands in the middle to denote a video game theme. A '1-up' mushroom (an in-game asset granting 1 extra life as originally seen in the Super Mario games) was added. The piece then gained the title 'Get a Life'! To start with, here's some progress images explaining the process. 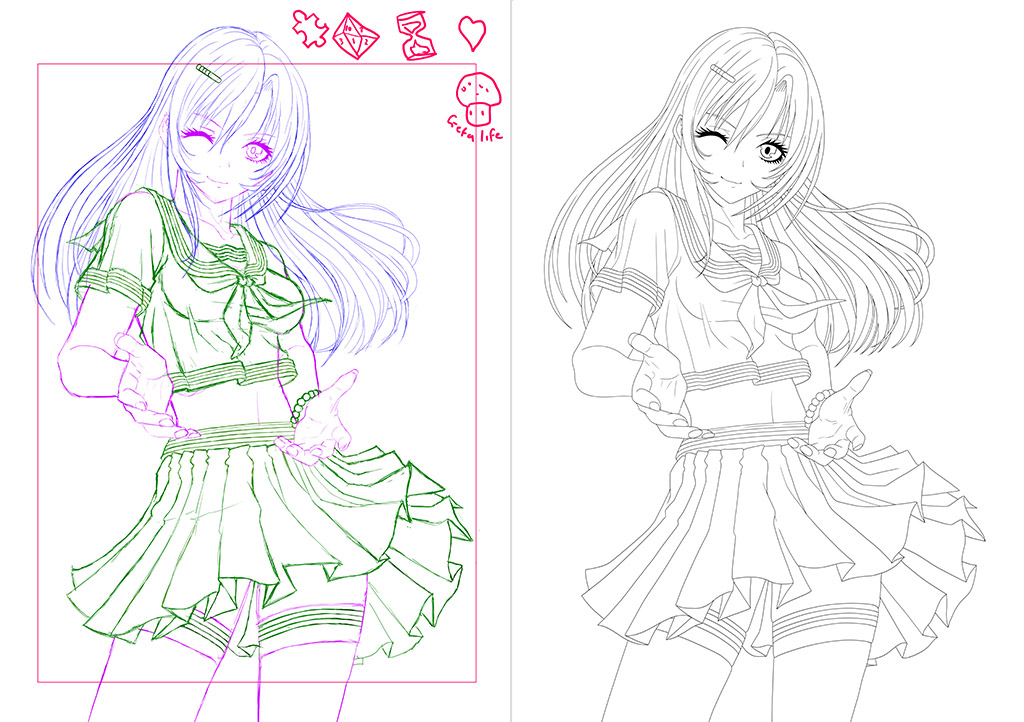 The digital sketch was created to begin with. As with other recent works, I'd use multiple colours to separate out different parts of the image. This makes its easier for me to read should the line work start getting too messy and complicated. I also sketch the clothing and hair on different layers in Photoshop just in case I decided I wanted to change the hair style or outfit to something else, but still didn't want to lose the pose information. Then the outlines were digitally inked with a thin brush. The original canvas is big- About 12,000 pixel height. this means the image should like sharp even if printed out huge. 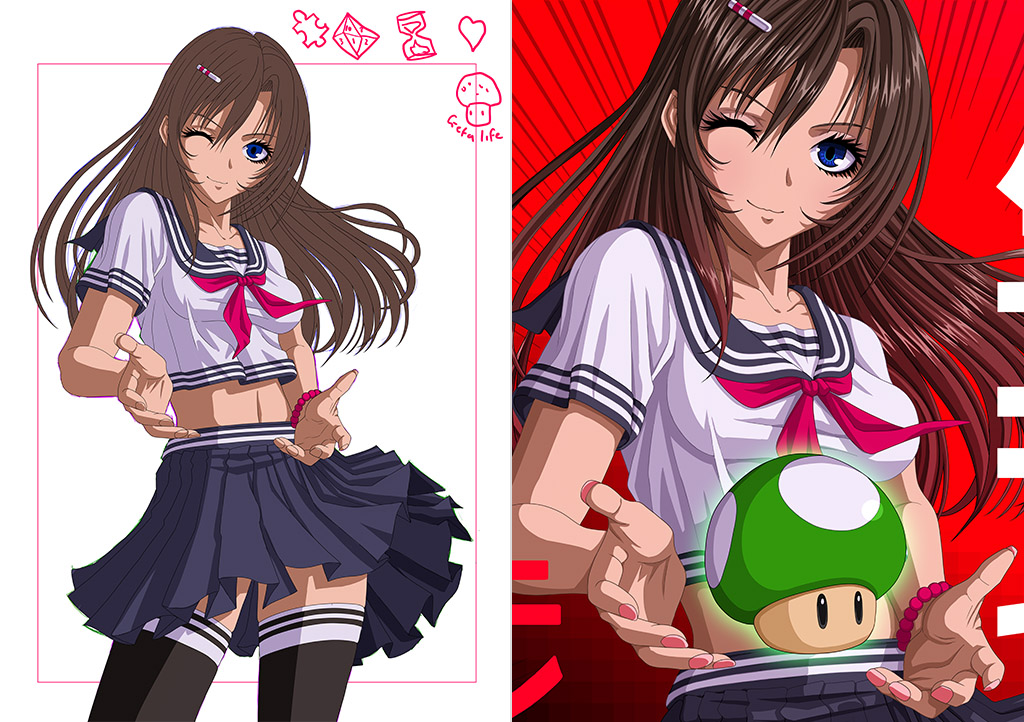 Next I added the flat tones, followed by the first layer of shadows. For a higher quality 'cel' style (using flat tones) I'll usually add at least 2 tones of shading for added depth. Sometimes I'll add another layer of highlights as per the hair in the second coloured image. As mentioned earlier, the 1UP mushroom was added in and some Kanji added to the background. Time-wise I think it took around 20 hours to complete. 15-40 hours for a single character illustration is pretty typical for me.

If you like the artwork and would like to support my artistic endeavours, I've turned it into an A3 print, available to buy on my store. It'll be hand signed and shipped internationally. Alternatively, the design is available on a T-Shirt in either Men's or Women's fit. All shirts are currently on sale in the site's shop at a reduced price. Thanks for checking it out :)

I'd recently finished binge-watching the first 4 seasons of super-hero anime 'My Hero Academia'. Despite initial reservations after the first episode, I ended up getting into it and really enjoying it. My goal was to create some All Might fan art in a similar style to the Tattooed Goku I'd created a few years back. Here's some work in progress images to show the process: 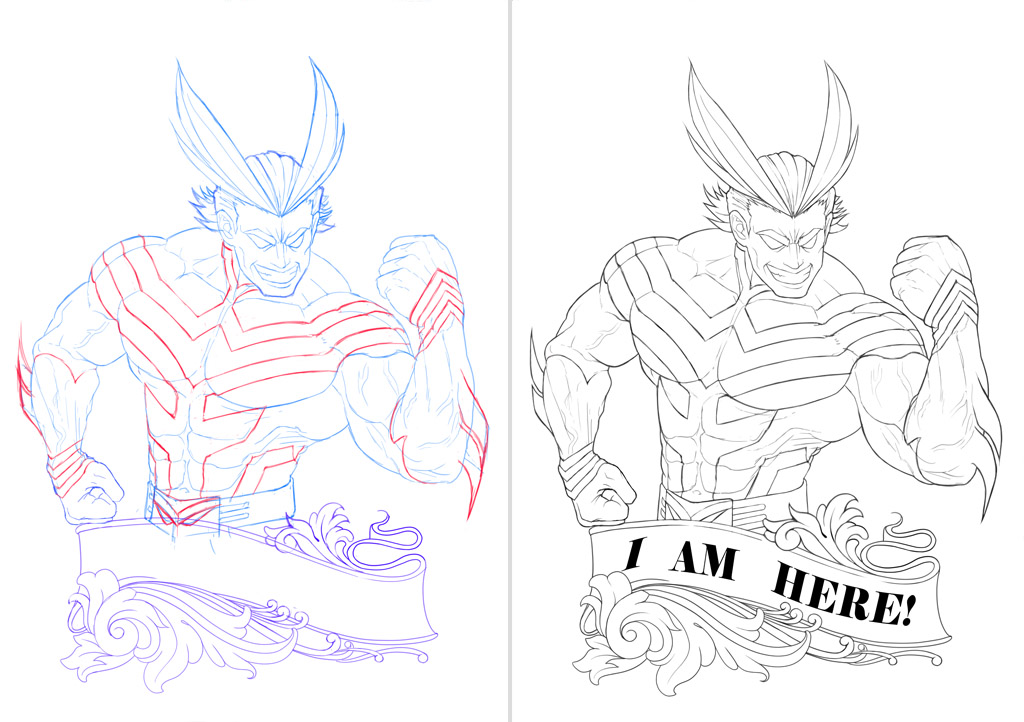 I started with a digital sketch using reference from bodybuilder Jay Cutler who reminded me of All Might. This was then refined and tidied up, adding his "I am here" catchphrase to the banner- a line he must have used a million times in the My Hero Academia anime!
Time: 7 Hours to draw 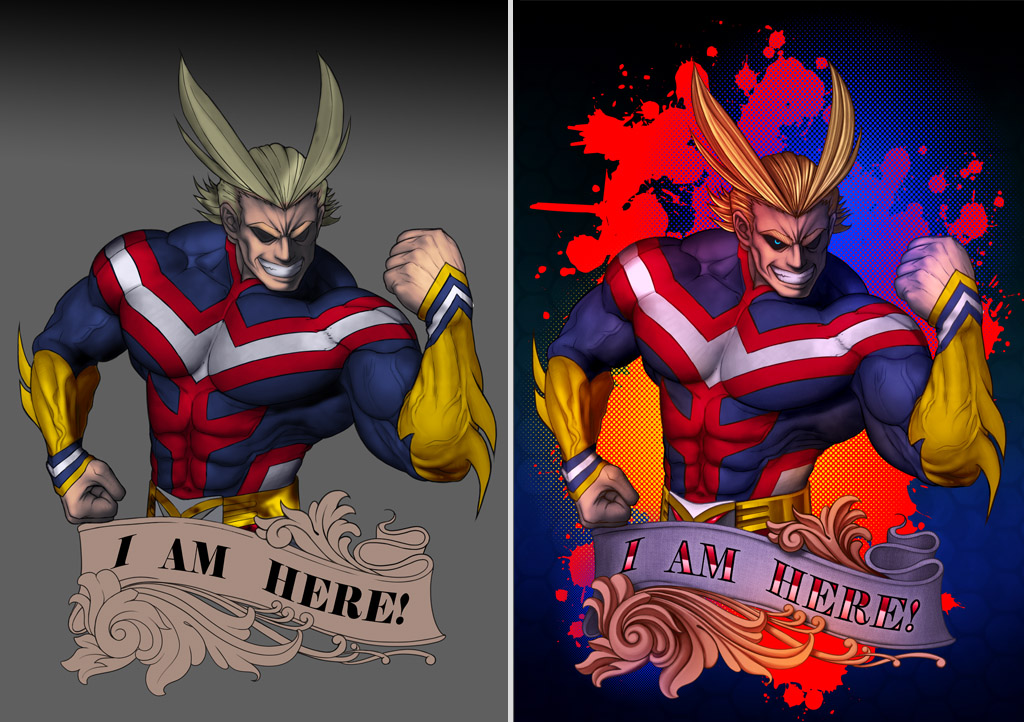 The first image on the left is probably around 60% through the colouring process. It was getting a bit dark, so brightened it up and added colourful background splatters to finish. I'm very happy with how it it turned out- makes a nice little tribute piece to the series 🙂
Time: 10.5 Hours to colour – 17.5 hours total.

Own The Art Print

As the icon of virtue, hope and strength, All Might can remind us to do good, help others and be strong. Would you'd like the symbol of justice to hang on your walls? And would rather display art which looks a little prettier than a copy-and-paste screen capture from the My Hero Academia anime? I've turned it into an A3 print, available to buy on my store.

I'd thought about creating and offering shirts featuring this and other designs in my store for some time. There was enough interest to make it happen, so have also now added All Might:

Thanks for supporting my artistic endeavours, and if you're a Hero Academia fan, let me know. See you next time :) 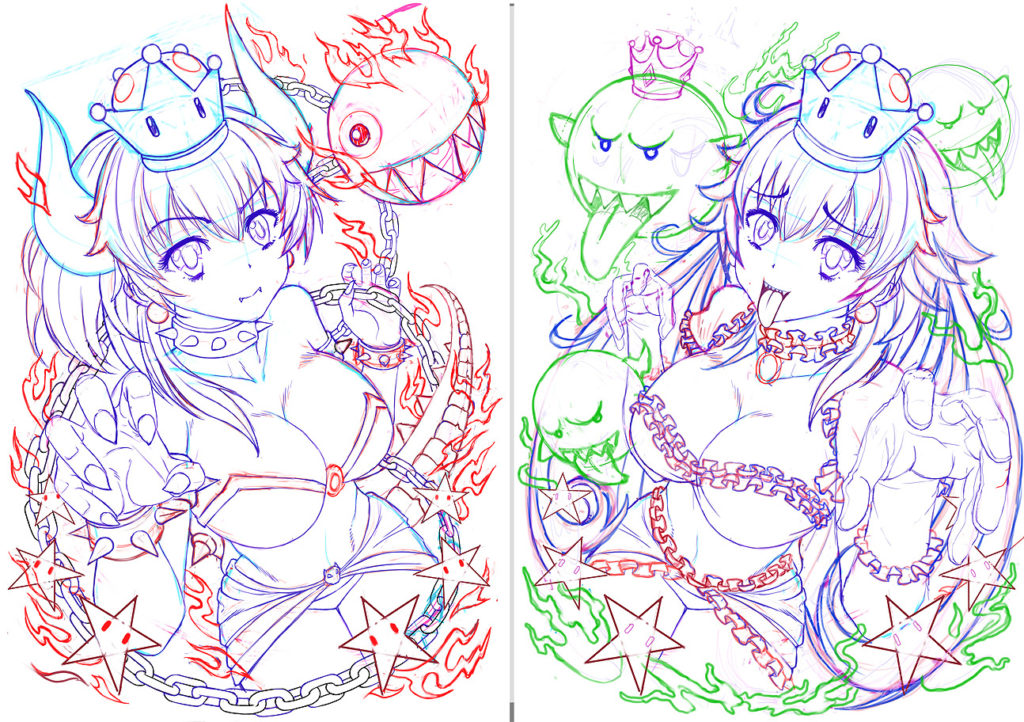 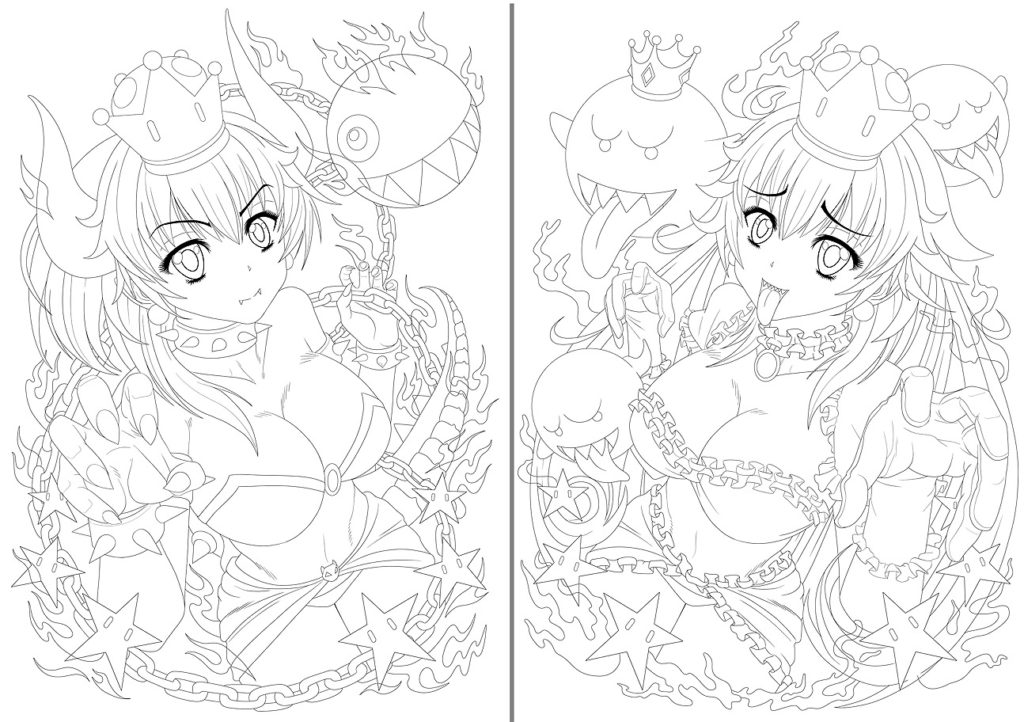 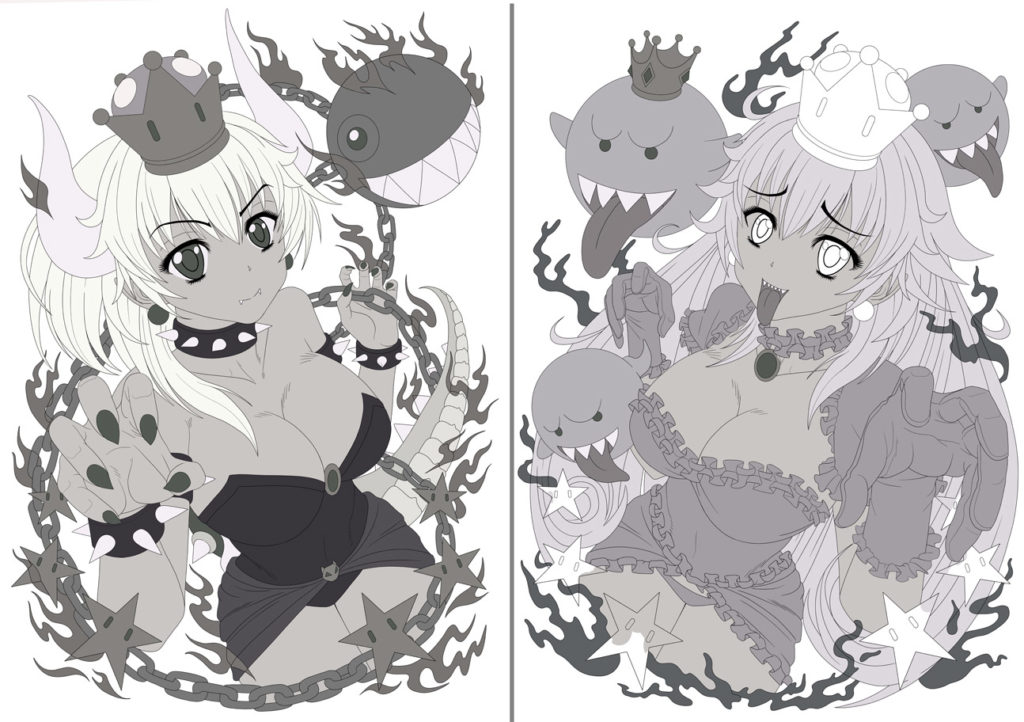 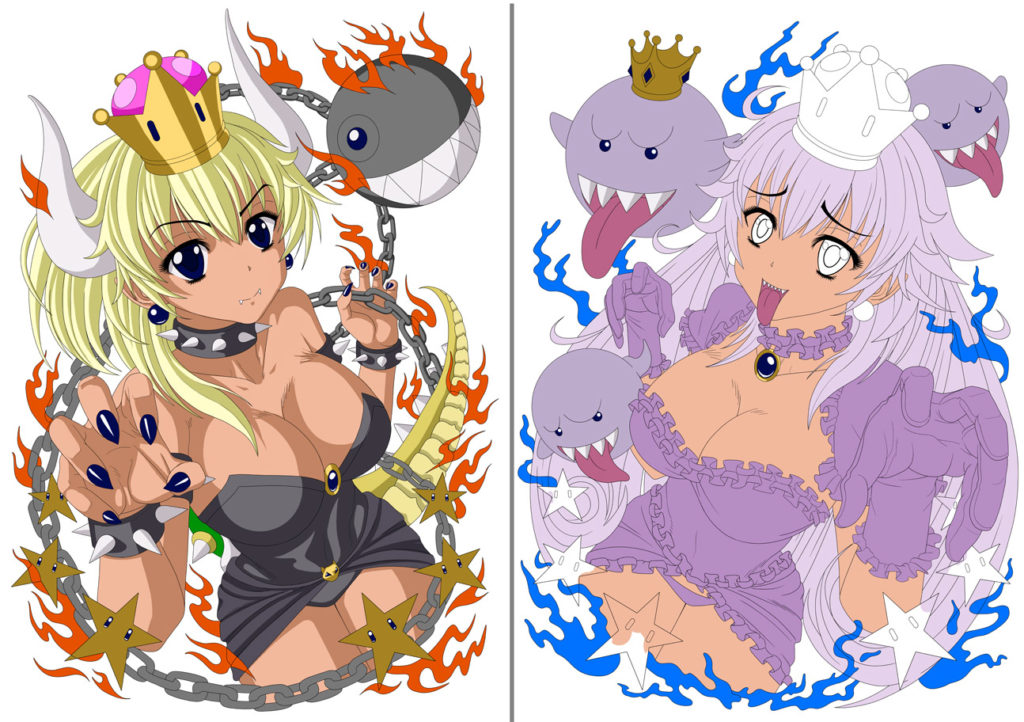 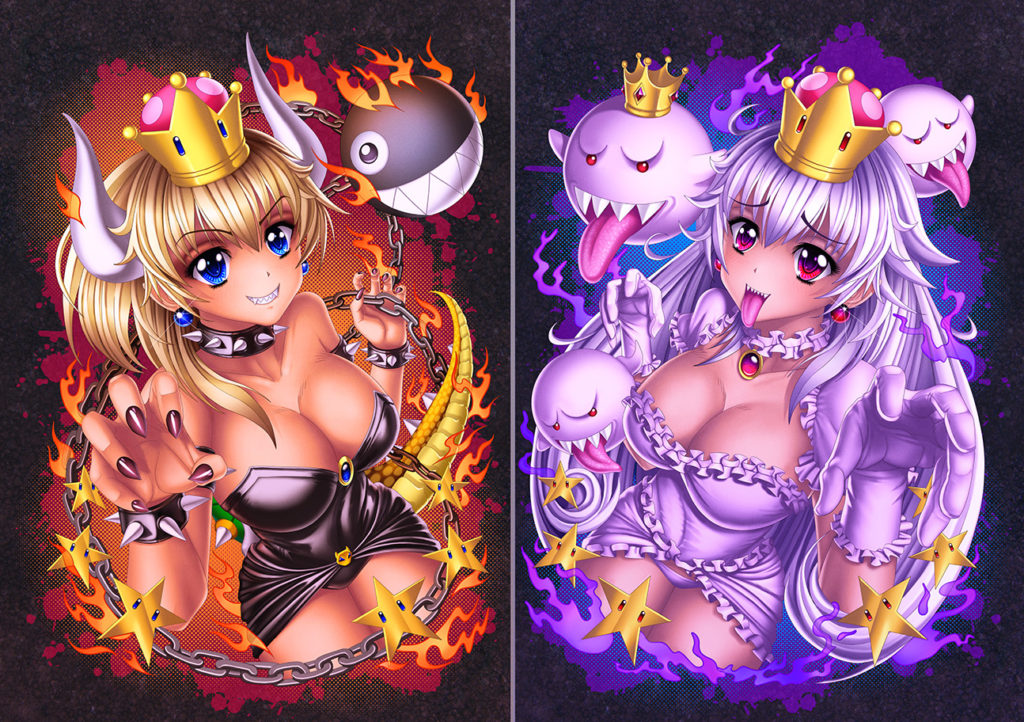 Drawing Ghost in the Shell Art

A Ghost in the Shell fan

I started working on a new bit of anime fan art a while back and thought it was about time I added some progress shots to my blog. I've been a fan of Shirow's (Creator of the Ghost in the Shell manga) work for 25 years or so. The first anime movie wasn't bad, but they really managed to nail it with the 'Ghost in the Shell: Stand Alone Complex' anime series. Complex is a good word for it as it's not your typical, basic 'good vs evil' plot, but something I'd recommend to older audiences who want a Sci-fi series with a little more depth and intricacy. I loved it! I wanted to pay some homage to the G.I.T.S. Solid State Society series with this artwork. 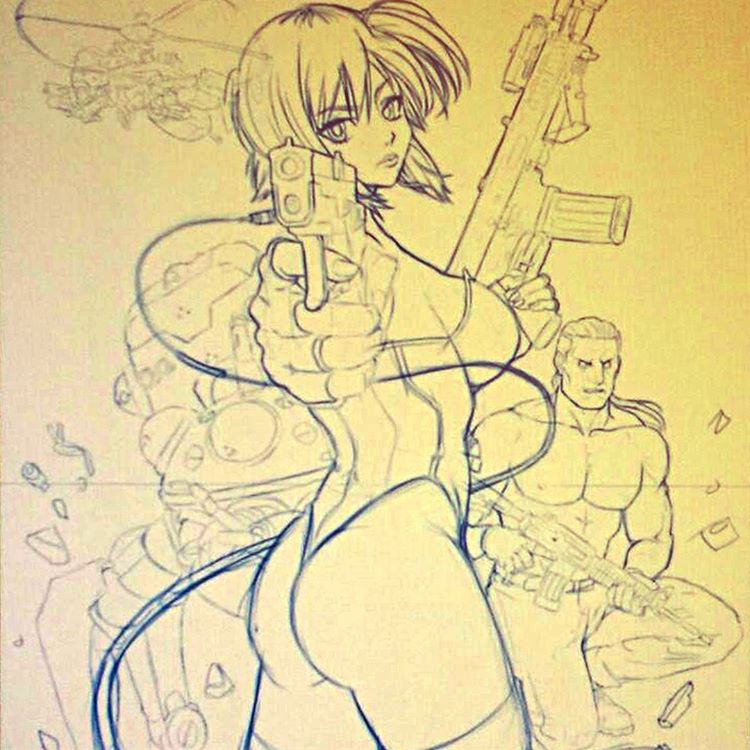 I usually start sketching in blue. This time straight into Photoshop. I want to go detailed with this piece so using a lot of reference to help out. The orange fade is just to stop it looking a bit dull, but I'd work with blue onto a white canvas.[/caption] 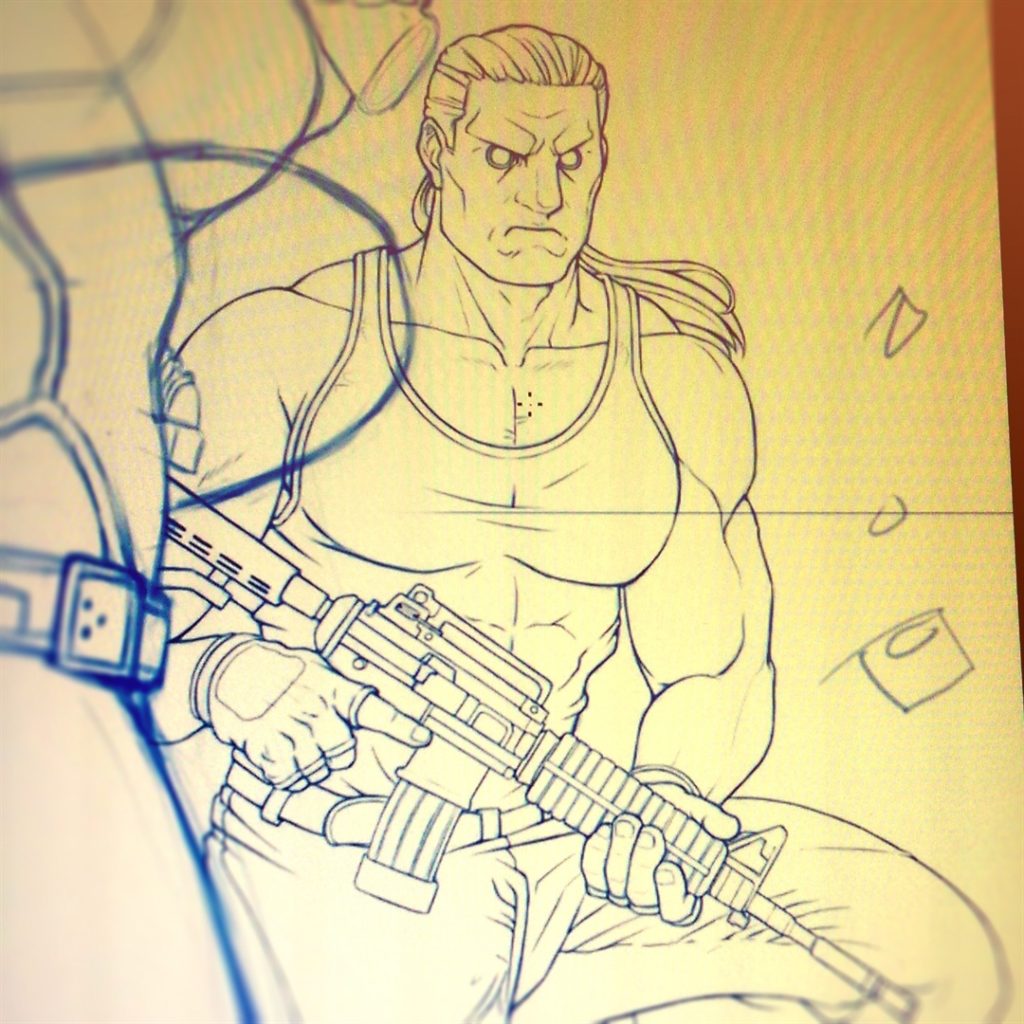 Finished refining the line work for Ghost in the Shell's main male character, Batou. I'll just add, I didn't particularly like him in the GITS live action movie. I didn't really like the movie in general, but I guess worth a watch and helped introduce the mainstream to the franchise.[/caption] 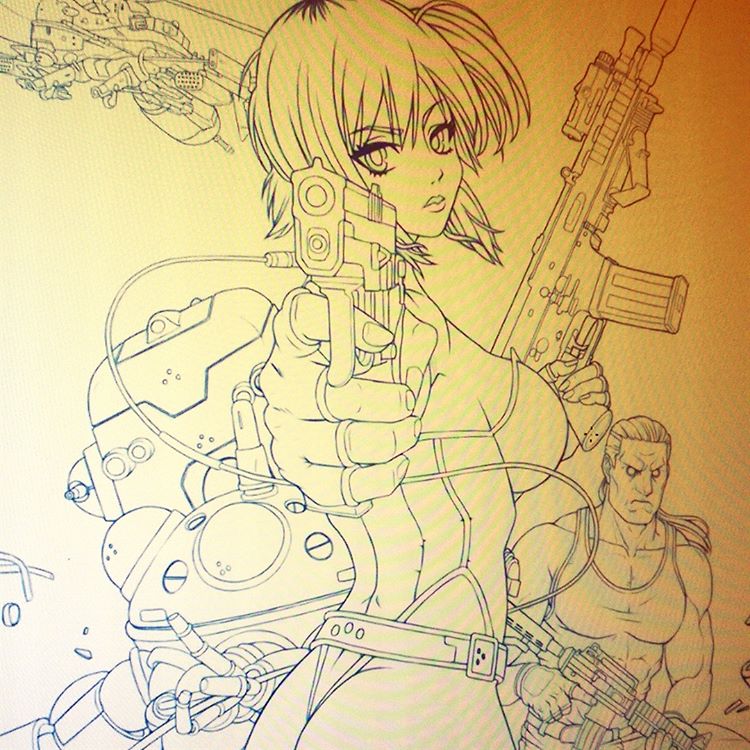 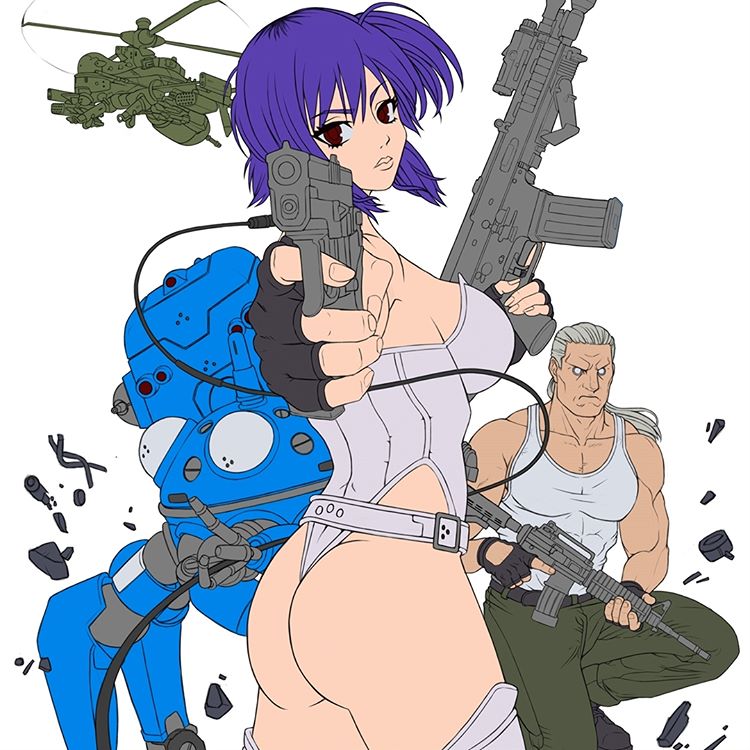 Finished laying down the base colours. Some artists might leave it there but I don't like the way art looks before I start rendering and adjusting the colour pallet.[/caption] 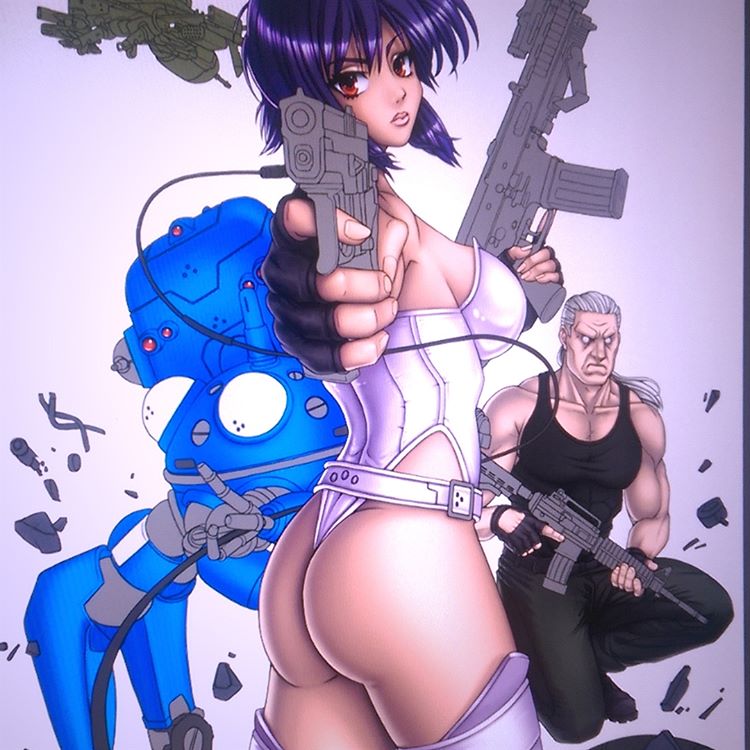 Began rendering. Usually I'll work my way through rendering each colour, then I'll begin adjusting the pallet, tones and contrast afterwards. It'll be several more hours until I'm finished with this one!..[/caption] 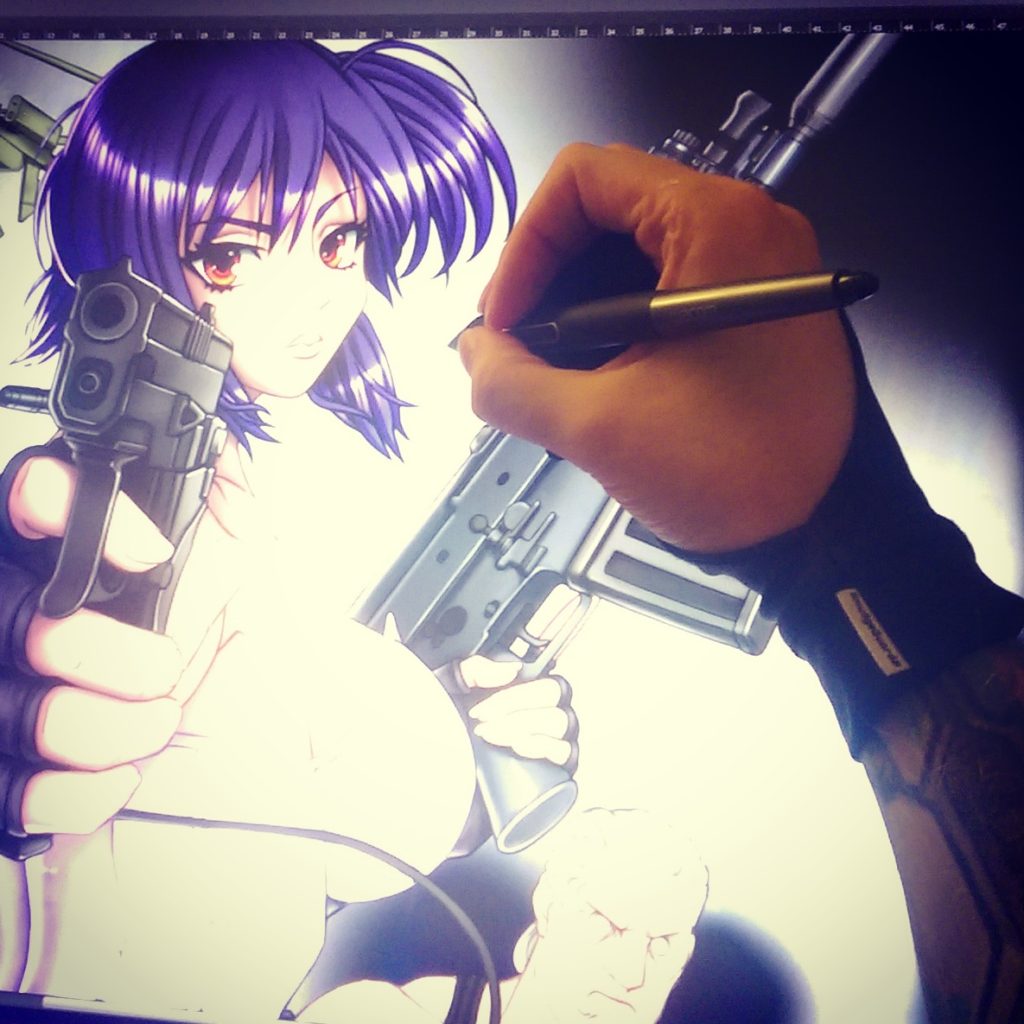 On the last stretch to finishing, making some tweaks to the Major by zooming in. Here you can see me drawing on a Wacom Cintiq 27QHD.[/caption] 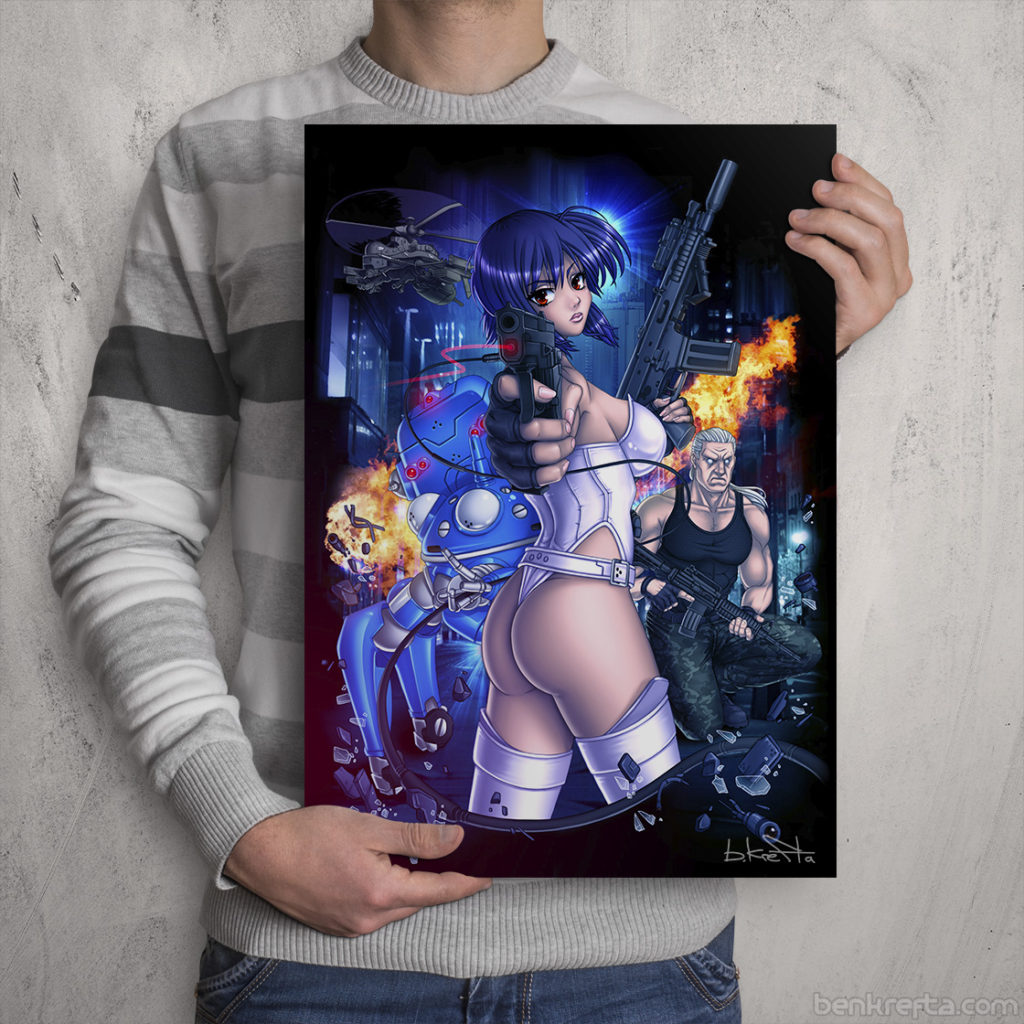 Here is the finished Ghost in the Shell artwork. Took around 3 weeks, but finally done :)[/caption]

Thanks for following through the progress with this one. If you happen to be a Ghost in the Shell fan and would like to support the work I do, feel free to head over to the shop and make a purchase. I currently have this one for sale as a signed A3 sized print. [Now in Metallic!]